So I already am taking part in HALLOWEEN HORROR MOVIE MARATHON MADNESS: THE HACK & SLASH EDITION    so I figured what the fuck? One more thing is fine so I am joining in on the Cryptkeeper countdown to Halloween. I was trying to figure out what to do so I looked at some of the other lists being counted down. My brother in bad Mr. Gable is doing the 31 Baddest days of Halloween and the badass over at Son of Celluloid is doing the Horror Movie Darwin Awards. Yeah, he will be counting down a bunch of fucktards getting the shit killed out of them(or almost) and letting us know why we should laugh at their misery. I looked through many of the others as well and lots of great stuff. I automatically was jealous of Gables as I can watch me a bad movie or two but when I sat out with my cup of  joe and smoke in my hand thinking I went back to what made me the way I am, a subject I have spoken of before with my Life and Death of a Horror Nerd article I did a few months back. I feel like there is so much more I can say with this so I started listing things that had huge impacts on me growing up and still do to this day. It was not hard to come up with thirty one but I feel like I picked the ones that had the most impact and assume many people had the same things. These are in no order but all were huge an my life. Well enough history bullshit lets get to it. Day 1 brings us theaters. 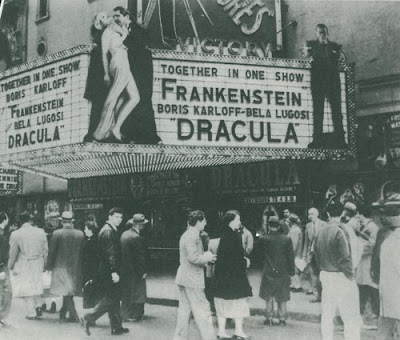 Theaters are obviously very important in growing up a horror nerd.  I have amazing memories of walking up to cinema west(the discount theater near my house as a child) and seeing double features of Pet Semetary 2 and Hellraiser 3. I also saw Candyman there and so many more.  There is a feeling of bliss that you get that can not even be explained. It is just something you feel. The sticky floor(from soda, unfortunately I am to young to of enjoyed the grind-house days where it would be sperm attaching my feet to the floor), shoving your hands in the bucket of popcorn and hoping you don't find a dick(sometimes I forget to take it out after I romanticize/trick the person with me), the taste of sour patch kids from the overpriced concession stand and the slightly uncomfortable seat that I still would rather sit in than a lazy boy. 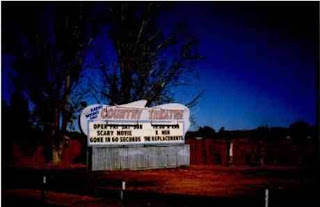 Drive Ins were another place to have an amazing movie viewing experience. When I was dick high I would sit on top of my roof at the apartment I lived in and watch whatever random ass 80's film was playing with no sound as I didn't have the speaker box. They later switched to where you used a radio station which was amazing as I could actually hear what was happening. The funny thing is I think I enjoyed it more with no sound. There was just something so cool about being eight years old and seeing Child's Play and having no idea why that doll is killing the shit out of bitches. There is just something amazing about things not being perfect, probably the same reason watching a shitty VHS can be way cooler than a blu ray(something that you could probably take the leap on that will make it into this countdown).  Once I hit high school and got my license we would see how many people we could fit in my car(you paid by the carload) to go see the double feature. The most I ever remember was nine, which was pretty rad when you consider I had a small Subaru(not station wagon).  We even had two people riding on top of the car with their feet dangling in my sunroof. Normally they would get pissy if you tried to get to many but that time they just laughed. I think we impressed them a bit. 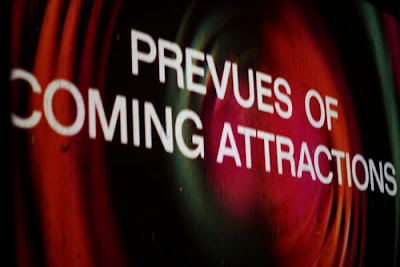 Trailers, not like the sweet one I lived in for a while but god damn prevues. To this day I make sure I am at the theater early so I don't miss them. Before I watch a DVD I look for trailers as It just doesn't feel right without them.  I remember the first time I  saw  a trailer for Freddy's Dead. I dropped a loaf in my pants. I was stoked. I immediately went and convinced my moms friend that he had to take me as I was 11 and couldn't get in without an adult. I knew my mom had no interest in seeing this so I got him and wow was I excited. Say what you will about Freddy's Dead, I think its a misunderstood film but I have already touched on that(like my moms friend touched on some little boys later so he couldn't take me to the theater anymore). What I am trying to say is that seeing Freddy in shitty ass 3D was amazing, and that our family friend went to jail for diddling little boys.
Today I still am constantly at the theater.  I am lucky enough to live in a city where there are more theaters than churches.  We have all the big chains and I spend a lot of time there staying caught up and then we have massive amounts of them that play classic films and you can tip back on the grog while you watch them. yeah, Deep Red with a beer in hand on the big screen in 35 mm. Sorry about your pants. We also constantly have directors and actors here promoting their films. I was lucky enough to see Evil Bong 3D when it came through. I also have seen Crispin Glover showing his films and Tommy Wiseau showing The Room as well as many others. 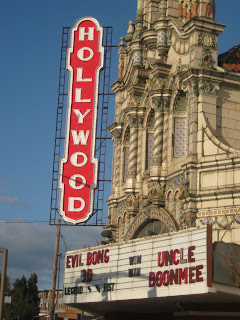 There are so many different ways to watch film and all have their benefits and downfalls. I mean in the eighties you just occasionally had to deal with irritating people or Mexican babies. Now you have the downfall of mankind with cell phone abuse. I mean seriously. If you showed me two pictures, one being a baby getting curb stomped and one being a cell phone screen lit up with a Fulci film in the background and asked me which one was worse I would have a hard time deciding. Back to the point, theaters have always and will always be important to me and shaped me into the nerd that I am.
Tromeric

Posted by Guts and Grog Reviews at 8:53 PM

very nice! My favorite thing these days is going to a theatre for a classic movie: Like in the middle of november we're going to see the evil dead trilogy on the big screen. HOLY SHIT that's going to kick ass.

I love that as well. I am hoping to catch the re release of Zombi later this month.