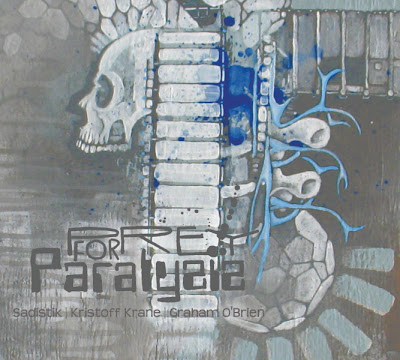 I met Cody(Sadistik) a Christ age ago when I had the Videodrome open and he would come in often and buy some of our best films. Suspira, Maniac, Street Trash. It was nice in a shit hole of  town to have someone with taste.  I remember him coming to my trailer to look through my collection and bring over the Guinea Pig collection as I wasn't luck? enough to have seen it yet. Well from there on it has been years of horror talk and drinks. He stops every time he is on tour and if he has no show planned we even will throw together a drunken house show. He knows his shit and it shows. On top of all that he is an insanely gifted musician. I suggest giving this a shot. If you don't like Hip-Hop, no worries. I still suggest you check it though.  His music will tear your soul apart.  This is a video from the upcoming album Prey for Paralysis which is a collaboration with Kristoff Krane. Kristoff Krane is another unique musician that I highly recommend.  I have had the pleasure of meeting him a few times while on tour and I can only imagine the soul punching they will give you together.  I was originally supposed to have a small role in this video but unforeseen circumstances caused me to not make it up to Seattle.  I did a review for Sadistik's last album The Art of Dying   Which you can read by following the link and i would also like to say that Prey for Paralysis  is now available for pre-order (with limited edition T-shirt packages as well) at both Sadistikmusic.com    or Michaellarsen.com


Tromeric
Posted by Guts and Grog Reviews at 3:04 PM