I grew up with VHS and have always been insanely late to the game when it comes to technological advances.  I refused to give up my tape collection and make the switch to Cd's for so long that by the time I did Cd's were almost extinct. In about 2002/2003 my stubbornness was tamed when I came to the realization that i could start crossing off my lists of movies I wanted very easily if I bought into the craze.  It didn't take me long to be obsessed.  I was living with Jeremy Gaulkenstein at the time and we would go out hunting every couple days.  It was a sickness, we were junkies looking for our next fix.

It was a time that I will never forget. My collection was growing faster than pedophile at his first day of work as the new mall Santa.  There were a small list of company's that I would keep my eye out and pretty much buy based off their name. It was like the VHS days all over again except for looking for Gorgon I was looking for Anchor Bay, I traded my Wizard video logo for Blue Underground and traded my Paragon logo for Synapse. While I loved VHS I was   more than happy to be getting all these special features and special packaging. 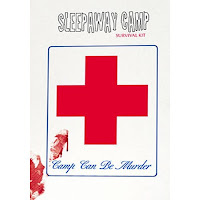 Anchor Bay was fucking shit up in the world of DVDs.  It was like rapid fire, every week something new that made me cream my pants. I bought the Sleepaway Camp box set one week then the next the Suspira three disc. They were putting out Argento and Fulci double features left and right. It was fucking amazing to finally be able to see this in their original unedited glory.  Anchor Bay initially put out Zombi and Maniac before other labels ended up putting out nicer editions.  I would just go through the horror section at Borders and look for the Anchor Bay logo and could pretty much assume I wanted it. 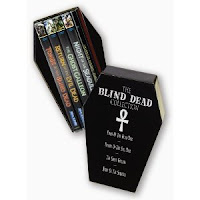 Blue Underground was another company I was always looking out for. I remember first noticing them when they put out all the Larry Cohen films.  They had some other gems. The Mondo Cane collection was beautiful and The Blind Dead collection gave me wood.  They put out tons of great foreign classics that included Contamination, Shock Waves and plenty of Bava, Argento and Franco. They also were the first to put out The Crazies, Dead and Buried and one of my personal favorites Uncle Sam.

Elite wasn't nearly as common but for the most part they put out quality.  Their Millennium editions of Night of the Living Dead, Re- Animator and I Spit on Your Grave were top notch and anyone that puts out Popcorn even in its bare bones shitty capacity get a high five in my world.

Synapse, one of my personal faves was there to help me get into my Asian cinema. Organ, Evil Dead Trap and Wild Zero were all early favorites of mine. They also put out Henenlotter's Brain Damage and the sequel to the classic Basket Case. The first release on Jim Van Bebber's Deadbeat at Dawn and Jean Rollin's Grapes of mother fucking Death. I could go on, and I will. Black Roses, Rock and Roll Nightmare, Christmas Evil and more.  Their stuff is at the top in quality and Their choices always give me a twitch in the pants.

Unearthed gave me my first taste of Asian snuff film with the Guinea Pig box set.  They finally gave Aftermath the release it deserved and can I just say Frankenhooker? 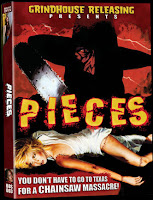 Grindhouse is ran by Sylvester Stallone's son and are probably the least prolific in the bunch but as far as what they do it will make the most jaded collector shit blood.  I mean they gave us Cannibal Holocaust.  I waited for more years than I was alive for that. Cat in the Brain, Pieces, Cannibal Ferox, and I Drink your Blood.  They put so much love and passion in their discs you can taste the sweat and semen.

Barrel has only put out a few flicks as well, and most of them are directed by Jorg Buttgereit but they are all sought after.  Last House on Dead End Street is one of the DVDs I had and sold to keep my store open and now will probably never get it again unless I want to pay a shit load. I must get behind the dead corpse of any company that puts out the Nekromantik movies and if they ever deliver their promise from roughly ten years ago and put out Angst I will cum blood all over my TV. That is a promise.

Something Weird holds a special place in my heart. They gave me all my Herschell Gordon Lewis movies. I pretty much owe them my life. They also put out the Special Edition of Basket Case and taught me endurance like I had never experienced with Blood Freak the worst movie about a christian turkey monster that craves junkie blood. It is so bad that it gives itself the reach around and becomes amazing. Something Weird continues to put out pleanty of things to kill time and be stoked. Their name says it all. 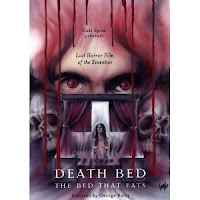 The market was flooded and I was OK with that. There were other company's that had some excellent releases. Cult Epics had Blue Sunshine, Death Bed and The Driller Killer. Criterion even dabbled in horror with Salo(I'll allow it), The 39 Steps, and Carnival of Souls. Media Blasters had Anthrophagus on their Shriek Show label with films like Happiness of the Katakuris, Versus, and Ichi and the Killer coming out on their Tokyo Shock label.  Mondo Macabro is always there if you want some bizarre films from all over the world. Where else can you get the Bollywood version of A Nightmare on Elm Street and Alucarda.

These days DVD has slowed down a bit but there are still a few company's out there that have my shit twitching. Code Red gave Madman Mars the treatment he deserved while also bringing the worlds only basketball slasher to my screen with Night of the Dribbler.  Severin has had many slam dunks. They put out a beautiful edition of Hardware, the new good bad movie Birdemic and more Emanuelle than cinemax has aired. Dark Sky put out one of my favorite discs when they put out the Manson Family two disc and they have proved themselves with their love for Del Tenney and amazing special editions of Texas Chainsaw Massacre and Henry: Portrait of Serial Killer. One company that keep surprising is Shout Factory. MST3K says it all but even outside of that the volume and quality of Roger Corman films they have put out will have any decent human being kicking a baby with joy. 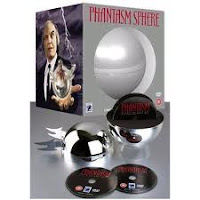 It is safe to assume that DVD have helped me as they have many horror nerds. It's evolution. VHS was amazing but once DVD hit the shelves it gave me something new to shit my pants over. Some of my fondest memories are with Gabe Nye, Jeremy Gaulkenstein, and Jacob Von Klingele spending the whole day hunting, bullshiting and having amazing finds. There is feeling you get when you find "that" DVD. It's something you can't put into words.  These days it is a lot harder as the market has mellowed out and Blu Ray has changed the game.  There are still some great discs coming out in large part due to the company's listed earlier.

Tromeric
Posted by Guts and Grog Reviews at 9:24 PM

The whole time I was reading this, I was thinking about the Phantasm boxset. That was really awesome when it just popped up there at the end!