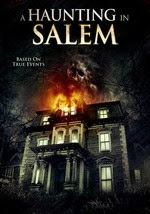 A family moves into a house in a new town and shit hits the fan. This house is haunted and it is pissed.  People start dying and shit starts getting real.  The daughter starts puking more than the Olsen twins so dad starts doing some research.  While this is happening tons of other weird shit continues in the house. A ghost starts instant messaging people like he's straight out of a R.L. Stine book  Dad now drives into town and meets the cast of Twin Peaks and finds out that his house was built on a burial ground. No Indians this time, instead it was the cast of the crucible. Once he finds out that more people have hung themselves in his house than David Carradine's he starts digging up graves like he's Ed Gein, which makes sense as he looks like Ezra from Deranged. This is just the set up.
A Haunting in Salem is a throwback to the haunted house films of the eighties and ninety's like House and the Poltergeist films. I don't even think of the last decade's bullshit haunting movies(a few exceptions, I am talking about the other A Haunting in...).  I want my haunting movies to be fun. I am not easily scared so fun is the emotion I am looking for and The Asylum has brought it back again. Music is a key element to any good film and the score to this had me gitty like a virgin on prom night. I was like the guys from that Chappelle Show episode, not the white ones but the black ones, you know the ones that could dance.  There are some good scares in this as well as some that didn't quite work for me, which honestly is one of my only complaints, it is however not a valid complaint as I knew what I was getting into and I wanted it. I sound like that girl that has lots of sex and then tries to pretend she feels bad about it. Fuck that I am proud to watch this. I losing my train of thought here, could be the Jager.
I am not claiming this is a perfect film, it has plenty of flaws I could pretend to care about, but I am not Roger Ebert and never will be, fuck that dude he talked shit about Blue Velvet. I am claiming that if you wait till it's dark, get a bottle, have some friends over, eat so much pizza and snacks that you feel like you are gonna explode like that guy from Meaning of Life and put this on you will have a blast.  This movie seriously made me feel like I was twelve years old again, I can imagine it now. I would of stopped by the video store rented this and Haunting that sweet video game for the Genesis where you are a ghost that haunts people.
What I am trying to say is Fuck yeah The Asylum hit it out of the park.

All I needed to hear was "The Asylum hit that shit out of the park." Shane van Dyke is doing really well as an Asylum director/actor. Hope he keeps it up.

Agreed. I am so excited for Two Head Shark. Going to own.