I will start right off the bat by saying that I have a very limited history of video games. They have always been around and I liked playing them when I was a kid but overall I would rather watch a movie or read a book.  I have tons of great memories playing video games and that's kind of what I will be going over here.  I know there will be tons that are not mentioned as this is about my history with video games not the history of video games. Last year Gabe Nye the Science Guy wrote an article on video games which I suggest you read if you want someone that knows his shit, and by knows his shit I mean gave up the feel of a woman.

Some of my first memories of horror games would of course be for the NES.  Fester's Quest is a game I would just play for hours.  I always loved the Nightmare on Elm Street and Friday the 13th games but even at that young age knew they were pretty much pieces of shit. I didn't care though.  I would play them for what felt like Christ ages just because two of my dudes where on the covers.

The Genesis is probably the most I have played video games at any point in my life.  There were a few stand out games that I couldn't get enough of.  The Ghostbusters game was a blast. I remember playing the shit out of this game. I loved the four guys running around with huge heads. It always reminded me of if the Ghostbusters were Pinhead from Puppet Master.  My favorite game hands down was Haunting. You played as Poulterguy and you just would scare the shit out of people. I always thought that was a cool idea. I would stay up all night eating chips and salsa and play this with the lights out. The Splatterhouse games of course were a huge part of the horror gaming world back then but when I think back it was always three that I remember. I loved that he kinda looked like Jason and you just got slash the shit out of people. Sold. The Genesis is also responsible for putting out my favorite licensed game ever. Toxic Crusaders. Yeah, Troma got a video game.  I never had a SNES but would always go to a friends to play Zombies ate my Neighbors. What a classic fucking game.  A few years down the line the flop of a system Sega CD came out and I was on the bandwagon. I remember playing the Batman Returns game but when I think back to the CD there is one game and one game only that always sticks with me. Night Trap. Yeah it was like a home invasion movie meets Slumber Party Massacre with vampires.  This game stirred up some shit. It gave the christian right fuel for their fire and Sega caved like pussies and took the game off the market.

After the Genesis I was pretty lazy when it came to gaming, I mean even more so and that's saying something.  I didn't even bother getting a PS2 till way late into the game.  I lived with people who had one and would play some games here in there.  I remember liking the Jaws one because it reminded me of Echo the Dolphin but with a shark, which is way cooler because dolphins are pretty lame and a shark ate Samuel L. Jackson.  I never really played The Thing but when I lived with Jeremy Gaulkenstein he pretty much stayed on the couch in his robe playing it for like a month straight so I saw the whole game play. Army of Darkness had a few games but Regeneration is the one I remember. I liked the midget and it was mildly amusing.  Good way to kill time till I got bored and put in a movie. 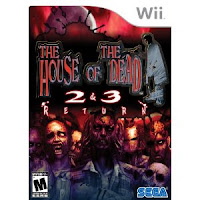 These days I still like to play a game here or there but usually end up seeing who Jason is killing instead.  The new Splatterhouse owned me. It was a little repetitive but fuck, so were the old ones. The Resident Evil games are fun and definitely something I have enjoyed.  House of the Dead is great when you have had a few drinks and just wanna shoot some fucking zombies, main problem is it always makes me put in the Uwe Boll movie.

These days it's all about the I pod.  So many games in the palm of your hand for cheaper than a hooker charges to be in the palm of her hand(because hand jobs are cheap). Horror Trivia, a game based on Pet Sematary and tons more.


I don't want to give the impression I don't love video games, they had a huge part to my growing up. I just am not the authority. This is my overview of games that I remember playing.  I highly recommend Gabe Nye's article which you can read here.

Tromeric
Posted by Guts and Grog Reviews at 3:56 PM