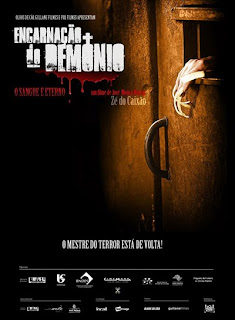 Holy Shit Coffin Joe is back, Howard Hughes Nails and all. For taking place so long after the last Coffin Joe Film which I believe was like 1967 or some shit it does a good job keeping the tone of the old ones. It does however go way above and beyond in the gore and sex, while for the 60s it pushed the envelope he obviously had to step it up being 2009. Step it up he did, the amount of mind blowing beautiful visuals in this are well mind blowing. Naked woman being cut out of pig fetuses, so many scenes of blood running down naked woman's body's, and the way the blood skips over the nipples, its like a blood waterfall of awesome. Coffin Joe with tarantulas crawling all over his crazy old ass, snakes and spiders climbing out of ripped up body's, a girl eats her own ass meat and seem to enjoy it, its like a Brazilian ROM COM without Hugh Grant. All you need to know is this movie is fucking beautiful and its nice to see Coffin Joe return to his roots, get the fuck out of jail and beat out diabetes. Beat up a little kid and steal his lunch money if that's what it takes for you to get this masterpiece of modern Sinema.