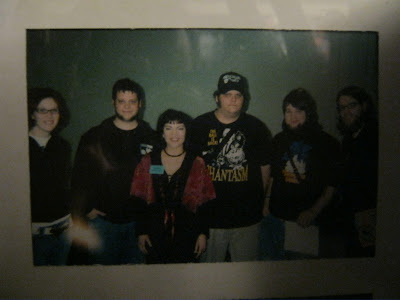 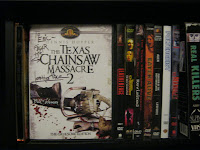 Conventions are a great place for a horror nerd. I would always see advertisements for them in Fangoria and Rue Morgue but they were always either east coast or at the closest LA.  I dreamed of going, seeing pictures of some my favorite actors and directors and all the party's. It just looked amazing. I would fantasize about all the amazing things I would find. Props, movies, toys and tons of things I couldn't even imagine. I went to a couple of com-icons that were fun and I found some cool stuff. I met Robert Kirkman, Julie Benz, Eric Powell, Steve Niles, Brom, Tony Moore, and James O'Barr.  I also frequented the Twin Peaks/David Lynch festival which was amazing. I met some rad people including tons of the cast and Jennifer Lynch. I got to see Eraserhead on the big screen while being more intoxicated than Hunter S. Thompson.  My Twin Peaks box set was signed by most of the cast and I saw ninety percent of the filming sites.
While at a Portland com-icon I found out there was gonna be a horror convention in Eugene, OR. I shit my pants right there. Eugene was only like five or six hours from Yakima so it was doable. The list kept getting better. Most of the cast of Last House on the Left, I was gonna get Friday the 13th: A Nude Beginning signed by weasel.  The majority of the cast of Return of the Living Dead was also gonna be there as well as tons of other greats. Well a few months my dreams were crushed as it got cancelled. Turns out all the hippies in Eugene were not interested in having it in their city. 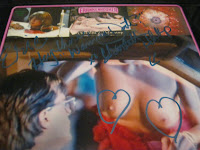 Well, it finally happened.  I was surfing the net in my shit garage and came across a site for Crypticon: Seattle. Kane Hodder, Bill Mosley, Sid Haig, Danielle Harris, Tony Todd and Ashley Laurence among many more.  I immediately bought tickets and Gabe Nye got us a hotel and we were set. It was a dream come true.   Below is what I wrote after I got home, a bit insane and plenty nonsensical as I was insanely sleep deprived.  Please excuse the gramar and spelling. I know it is worse than usual. I had been awake for four days, still kind of drunk and typed it on my cell phone. I just want  you to understand the welcome insanity these conventions bring.

Cryptikizzle
I stayed in a Hilton....not something i ever thought i would do....the glass elevators made some skid marks in my pants but i got used to it...the skid marks that is...Keith and i wore they live glasses while freaking out on the balcony of the ninth story room i had...Jason Mewes is funny as shit kinda like Jay but smarter...not classier by any means...he hoped us well on getting pussy so that was thoughtful....Kane Hodder almost knocked Gabe on his ass and choked the shit out of us....i won the puppet master box....Jacob won the full moon classics box....and Gabe won...well nothing...we all learned we love bawls(no homo) and floats made with bawls(no homo deuce)are awesome as well...lix online is a great t-shirt company and we will be on the website soon...Danielle Harris is tiny but still sexy...Ashley Laurence is also very sexy and has very cool art....Hanna Hall is sexy, nice and enjoys a pall mall which is a-OK in my book...and i do have a book...Sid Haig should be president....Candyman dwarf's me which is not something I'm used to...Roddy Piper is amazing and will soon have a book about soap monsters and has a great collection of doorstops.....Bill Mosley made fun of a fish and has an amazing voice....Gabe almost bought a pirate costume to win over the girl of his fantasy's(no pun intended) i even spill my beer when im sober....Steph hung up on Jason Mewes and he told her she loves the teabag and i dont think he ment earl grey....crazy skull guy from willow was there but no Warwick Davis or Val Kilmer action...Joe knows more about nkotb than the average male his age....cigarette smoking man has a soothing voice for such a smoking champ....i got a pack of

Morley's no smokes in it though to bad I'm sure old made up cigarettes are tasty.....59 year old's still have game and can get the poon...fancy wedding party likes talking about horror movies...shots through the cage on the ninth floor....in no order or comprehensible fashion that(longest sentence ever) sums up my weekend...now a couple hours of sleep then 17 hour day of work at Sasquatch....good times.

Next up we have my insane rant about the second one I went to.

cryptikizzle 2 the search for curlys gold 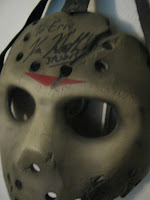 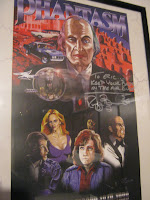 Bumper to bumper traffic on I5.....almost pissed my pants trying to find parking...found a McDonald's with a lot so stopped to piss...gotta have a key so had to buy a shitty 99 cents burger and almost pissed myself again in the process...got in..nerded it up...Coscarelli is a bad ass and way taller than expected..scared of TCM....the sphere attacked me and i giggled like a 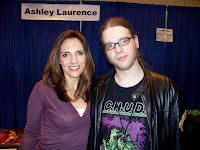 uper awsome panel with ken foree and michael berrymen....aside from "that girl" and her questions....pics with foree and berryman...foree is pretty bad ass...he could kill me...even though he went down like macauly caulkin in from beyond...nicest dudes ever though...time to go...quick twin peaks tour for christy and brian....eat huge burgers and fries...get a refill on fries...bad idea...gas up at the vanishing gas station .....time to drive 200 miles on a food coma..good times....in one mispelled, poorly worded sentance that was crpticon part 2....hopefully part 3 will be in 3D...ill give the camera a joint...pix up soon... 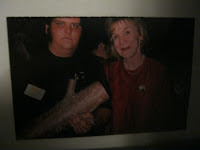 I have now missed a few conventions that I should of attended. I guess that's what happens once you have something you take it for granted. Before I would of driven days for a convention now they are near me and I am like "well, maybe next year."
Tromeric

I live about an hour from Boston and 4-5 hours from new York, and I don't get to as many of these things as I'd like. Now with the blog, it might be something worth doing, because they are a lot of fun, and it looks like you've had some really great experiences going.

Yeah, I have been lazy lately. I need to go again. Some of my greatest memories for sure.