Books, of fucking course they are part of the indoctrination. They are one of the few things that predate movies as a way to get your dose of horror, unless of course you were a prostitute in the Whitechapel district in 1888.  Some of the tales that are still told today in modern versions were put onto page long before your mom accidentally got impregnated with your seed. Bram Stoker brought us Dracula. Mary Shelly brought us Frankenstein and there was of course Edger Allen Poe and the fucking madman and genius HP Lovecraft. Books have been integral to the birth of horror in the same volume that alcohol was to your mom. 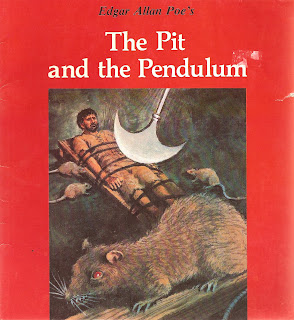 I think back to being a little(well that's debatable) horror nerd and one thing that instantly springs to mind is Edgar Allen Poe. When I was in elementary school we had a scholastic book club where you could order books, magazines and got pizza and shit. I am not aware if they still have this as I know what birth control is but at the time I loved this shit.  I ordered so much stuff and then was like "mom, I need twenty five books for some random books I ordered." Luckily she was always supportive of my weird habits like reading and Scorpions.  Well shockingly I am off topic, so lets get back.  I got these bad ass illustrated books of Poe that included The Pit and the Pendulum, The Raven, and The Monkeys Paw.  I read these for than a chimo reads Teen Beat. that's a lot in case you were wondering. I loved the stories, I loved the pictures that were surprisingly gruesome for a kids book.

One set of books that defines me better than Webster(I mean the little black kid, not the dictionary) is the Bunnicula series. I lived by these books. You think Christians are protective of the bible. Try saying something bad about Bunnicula to me and you will wish for a good stoning. Bunnicula is a vampire rabbit that sucks the blood of vegetables and the cat Chester is out to blow his cover. These books still hold up for me. I have always dreamed that they be made into a film. I would cum so hard I would give my self a pink sock of the dick. I have no idea if that's possible but if Bunnicula does get the big screen treatment we will find out.

What kid doesn't love telling stories. You have seen it in movies like The Willies and on TV with Are you Afraid of the Dark? Well I loved it for sure and would set up a tent in the back yard and tell my friends the dumbest shit.That part hasn't changed that much but one thing that did change it was when I found a book at the library call Scary Stories to tell in the Dark. I took that shit home and was hooked like Franks face in Hellraiser.  I would devour the three collections of stories. Over and over and over. I didn't give a shit. It was  a sickness. I would try and draw the pictures out of the books, they always looked like they were done by a mentally challenged lemur on his death bed but God dammit I tried. If you want a more detailed look I suggest going to see the Dr. and reading his write up. I wish I had more time for these but I have done a fair amount of reading in my day so I must movie on.

I of course heard the name Stephen King a lot when I was a kid. I had seen a few of the movies and It had been made into a massive television miniseries which I taped and watched and loved. I went to the library and check out IT. It was huge. I was only in fourth or fifth grade. I was determined to read it. Everyday after school I would sit and read, not even fully understanding everything I would read it for hours. I finished which felt like I was a legless man winning a marathon race, well at least close.  Over the years I have had mixed feelings on Stephen King. I have read a lot of his books and find the majority kind of boring. There are some exceptions obviously. The Dark Half, Carrie, his collections of shorts for the most part are super fun.  This guy has had so many adaptations and a lot of the time they don't work as well as they should but I still always give em a watch. I mean I do want to see what Mick Garris is up to.

Once I saw Hellraiser and saw that Clive Barker was also an author I had to read his books. I read The Hellbound Heart first as I couldn't get Hellraiser out of my head. I moved onto his other Works. Cabal which would become the film Night Breed and all of his shorts and books of blood. I was so young I don't think I got it all but I didn't give a shit. Stephen King told me the future and I listened.

R.L. Stine has always been one of my favorites. His Goosebumps books may be written for children but fuck me I am thirty one and still love to read them.  Fear Street his more young adult series had it's fair share of fun and fear as well.  I feel he is extremely underrated and has been categorized  totally wrong. He is one of the most proliphic horror writers out there and is insanely interesting and entertaining on so many levels. If you want some good reading just go follow him on twitter. I mean seriously. He is one of my favorite people to read on there. I guess I am one person who can say I love R.L. Stine's Twats.  Well hopefully I am not the only person. His influence is insane he has had multiple TV shows based off his work and some pretty amazing movies. I mean have you seen When Good Ghouls go Bad? Yeah, it's the dude that directed Spaced Invaders and stars Christopher Lloyd. The Haunting Hour is insanely fun to watch aside from the god damn song that will be stuck in your head for days. Goosebumps was huge when I was a kid and I still can barely walk into a grocery store without seeing one on the shelf.  Don't be an asshole. Give R.L. the love he deserves. 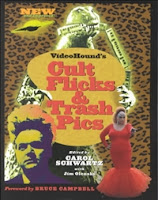 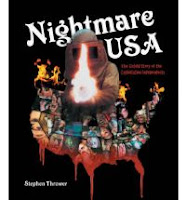 When I think of horror books of course the classic novels all are huge but I think reference. When I first started diving into horror the internet was not nearly as accessible as it is these days. One of the best ways I had to find obscure films was reference books. My mom got me Videohound's Horror show and I dissected it like a fat kid with a countdown to Christmas calender. I would just sit and read each one and anything that even sounded fucked up, weird, bizarre or twisted(which was pretty much everyone) I wrote on my massive list that I would take to the video store with me. Any time I see a new reference book on horror I still will buy it and I would wager that at this point in my odyssey there is not a whole lot of discovering left for me.

I wanna give a special shout out to bizzaro fiction. I am a sick and twisted individual so it is probably not surprising that when I see a book called Baby Jesus Butt Plug I am thrilled. I saw the author at a horror convention a few years ago where he was with Eraserhead Press.  They pretty much cover it all when it comes to bizzaro. I don't want to ruin any of the fun as reading all their descriptions was a blast. I do suggest you click the link and have a blast of awesome to the face.

I have always read more non fiction than fiction.  It is probably because I never liked reading the bible. I get sucked into a good memoir or biography a lot quicker. I am not here to figure that out though.  There are so many memoirs out there for the horror genre. Everyone from Wes Craven to Adriane Barbeau has one and than all the reference books on a particular director is even more insane.  Lloyd teaches you how to make a movie, Bruce Campbell teaches you how to make love(although that is more fiction) and Fulci, Agrento, Lewis, Miike and pretty much every other influential horror director has one. My bookshelf is full of these and will continue to grow.

I am not as up to date on horror fiction as I probably should be as I spend most of my time reading magazines, reference books, memoirs and classics(that is when I am not watching horror which is also takes up a fuck ton of my time).  I have however found a few current books and authors that I will recommend to anyone. Jack Ketchum is easily my favorite of the modern horror authors. The Girl Next Door is so dark and brutal, Red is a perfect tale of revenge and the Off Season/Offspring/The Woman trilogy is a perfect trilogy. I remember when I bought Offspring I read it in one sitting. Brandon Ford has had a couple novels that have been praised and recently put out a collection of short stories which I just read. Excellent collection.  I have not had a chance to read John Dies at the End but I absolutly live by Cracked.com and am super excited for Coscarelli's adaptation of it. It is in my to read pile and have heard nothing but good things.

I will end with review/movie journey books. I someday myself have plans on publishing a book of the grog but that is of course down the road, hopefully not the road that leads to nowhere(RIP David Hess).  Mike Nelson of MST3K fame put out mega cheese which is such fun read, Vern has two books of reviews out which aren't straight horror but of course those are my favorites.  He is one of the best people to read reviews from in my opinion. He is entertaining and not your standard film critic.  His love for action, horror and everything in between is refreshing.  Last I will leave you with one of my favorite books. Showgirls, Teen Wolves and Astro Zombies. It is Michael Adams one year journey to find the worst movie ever made. It is hilarious and insightful and I myself have watched many of the movies he tortures himself with so it is comforting to see someone else endure the pain I have felt.


Tromeric
Posted by Guts and Grog Reviews at 9:00 PM

Ah Dude! SCARY STORIES! I loved that book when I was a kid.