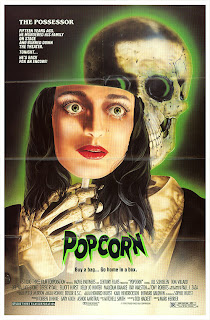 Early ninety's slasher film that is basically a big William Castle facial. This movie just oozes so much love cum to Castle and I love it. It is the adult Matinee which of course also was a huge homage to Castle but luckily since Matinee  is more kid friendly   it has less semen being sprayed all over its face as I wouldn't want to see Dante or Ormsby going to prison due to not checking the license.
OK, back to as much of a point as I am capable of.  A bunch of nerds take over a theater and show some shitty movies and make everyone smell dead dog and farts and whatnot. They get a film from a guy that died after he killed some people. He is basically the love child of H.G. Lewis and Joel Reed, or maybe Donald Sutherland. People are dying. Is it him?
So many great lines and kills in this, not to mention references.  You have one of the sexiest woman in the world Jill Schoelen previously seen as a stepdaughter to that crippy from lost and Dee Wallace.  A lot of times this is looked down upon. I don't get it. If you wanna have a good time a few laughs check it, otherwise maybe you should just go off to bible study or something.

Tromeric
Posted by Guts and Grog Reviews at 8:11 PM

I was fortunate to have seen this on the big screen at the ripe old age of 14, and it was a hell of a treat. Back then I wasn't educated in William Castle territory, but can certainly see the homages now.

I almost went and saw it but didn't till the VHS came out. Still love it to this day.