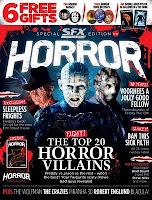 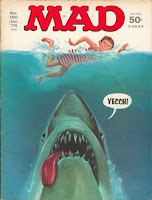 There was a time when you couldn't just click on the Mozilla logo and have access to any review or info on any horror film you were looking for. It was a time when you had to find a store that sold magazines, buy them and take them home and drool all over them. It was a beautiful time, sure the convenience of the internet is nice but there is something to be said about print media that I am scared we are gonna loose.Thanks to horror nerds being obsessive about collecting I think we have a while but only time will tell.
The first time I remember coming into contact with a horror publication was when I found a stack of Famous Monsters of Filmland at a local thrift shop.  I of course used the change in my pocket to buy them and took them home and, well to be honest if I was old enough I would of jerked off and came all over them. I am glad I couldn't cum yet because I would of been bummed when I went to  read them again and the pages were all stuck together. It would of been like  the  time I found my grandpas Penthouse and got straight up denied on some titties. Seriously though, I read these things over and over. I would just look at Godzilla, or Phantom of the Opera and it just made me stoked. I ended up eventually cutting out the pictures and putting them on my trapper keeper. Yeah I was that bad ass. 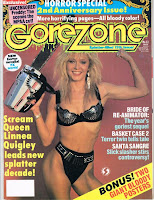 OK, now I am in fourth or fifth grade and I am at Waldenbooks and I come across something I have never seen. It's called Fangoria and Jason mother fucking Vorhees is on the cover. I have to have it so I go beg my mom with no shame and she gives in. I take it home and I can't put it down. I must of read this thing a hundred times. It now was my manual. Every couple months my mom takes me back to Waldenbooks and I grab the new issue and if they don't have it I just get something like a Scorpions Virgin Killers tape or Alice Cooper's Raiser your fist and Yell.  On one of these trips to Walden's I find Gorezone. It is the same people that did Fangoria but all about gore film which I was discovering I had a major hard on for.  I would continue to read Fangoria for years and still to this day will pick it up from time to time. 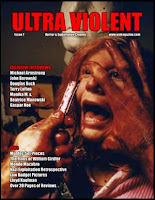 Through the years there have been many great indie publications that have come and gone and of course some are still around. Deep Red which was Chas Balun's amazing magazine, he has recently passed on which was a sad day for all horror nerds.  In 2001 after I saw Audition I like many went on an Asian kick, Asian Cult Cinema was my go to guide. One of my favorites that is not monthly but always worth the wait is Ultra Violent.  They cover some great stuff. Retrospectives on Last House on Dead End Street, articles on Camille Keaton and interviews with the cast and crew of Murder Set Pieces.  I am more than excited every time a new issue is out. There is a UK Gore Zone out that pales in comparison to the one from the eighties but still is worth a pick up just for some of the pictures and I have found out about quite a few of European films long before they make it to the states.  Serial Killer Magazine is great for any true crime lover and one of the classiest reads ever Girls and Corpses. 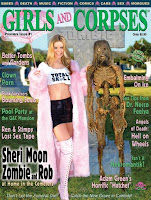 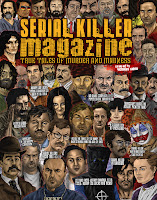 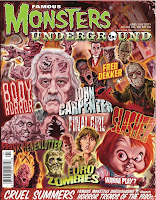 Through the years there have been many great one shots. Fangoria has done poster issues, or specials on the big film of the summer. I know they have done them for some of the Nightmare and Friday movies and of course they did a massive Freddy vs Jason one right before it was released. Recently Famous Monsters of Filmland put out a great read called the underground. There have also been great convention only issues of many of the magazines that are worth checking out for any collector. 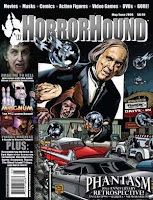 Today while I still will pick up Fangoria from time to time or any chance I get to get some of the great indies there are always two magazines I pick up every month or two depending on release and those are Rue Morgue and Horror Hound. Rue Morgue while covering the new stuff  always has great retrospectives, lots of great write ups on music and literature, reviews and some great columns. I love It came from Bowen's Basement and The Gore Met is shockingly my favorite part. The thing that stands out more than anything though is their art.  The covers are always beautiful and worth the cover price alone. Horror Hound is a little younger but they came out of that womb fucking the hottest girl in class. Their retrospectives on everything from Halloween to the year 1981 have been amazing reads and their coverage of toys and collectables give them an edge that no one else has.  Reviews and interviews are always good but the main thing that keeps me coming back is their Video Invasion column every month. Each issue a different label is covered in depth with pictures, catalog, promo items. It is a must read for any collector and I hope they end up putting out a book of them all.
In the end there are benefits of the internet and things like the nook and Ipad's but I myself will always prefer the smell and look of a print magazine.

Tromeric
Posted by Guts and Grog Reviews at 7:29 PM