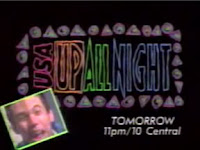 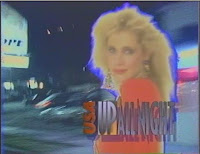 It was the late eighties and I was up late on a Saturday night and flicking channels and came across something that caught my eye, or my ear.  Gilbert Gottfried. That voice I had to know what was going on. Well he was talking about horror movies. I was hooked. Every weekend I had to watch, usually both nights. Friday was hosted by Caroline Schlitt when I fist started watching but she was soon replaced by the insanely sexy Rhonda Shear. Let me tell you when your ten or eleven and this sexy ass woman is talking about Troma films or Return of the Living Dead, lets just say Rhonda taught me what a boner was. I have the fondest memories of this show. I saw Attack of the Killer Tomato's, The Toxic Avenger, Shocker, Cannibal Woman in the Avocado Jungle of Death and so many more. I wish I could get a time machine and go back to this. The feeling I had every weekend in indescribable. I have attempted to find copies of some old episodes of these but it just hasn't been that fruitful. I have a few random ones and you can watch some clips online which are great but God Dammit I want every episode in special edition DVDs. Is that really to much to ask?

Posted by Guts and Grog Reviews at 4:51 PM

Man, I loved USA Up All Night. One of my worst VHS experiences growing up actually came when I tried to tape a Kato Kaelin beach movie that was on on Saturday (Sunday morning) from 3-5a. It was one of those deals where I had to tape it off of the cable box, meaning I needed to turn the VCR to channel three, then run the cable box through that. Long story short, I woke up at 4:30 to see how it was going only to find my father in a bout of insomnia had come out to the living room and turned on Headline News. I had no idea that in 15 years the Internet would come up with things like eBay and Bittorrent and Instant Streaming, I thought I'd missed an amazing opportunity forever.

I think that kind of speaks to the beauty of USA Up All Night, that back then, if it wasn't at the local video store, Up All Night was the only way you'd see a lot of these-- or even know they existed. Even now, with all of the resources at my finger tips, I can't find some of those old gems I taped and now have lost. If only I could go back in time with a DVR box...

Sadly, I was just too young to enjoy this. I wasn't a huge fan of horror movies so whenever this came on I usually buzzed past it for something else. I did watch it a few times and Gottfried was amazing. But I'm really pissed that I never took it in.