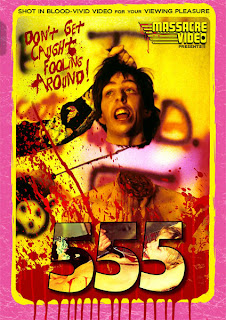 555 is another classick shot on video from the eighties.  Look at that cover. How can you not want that.  I think I saw this when I was a kid but again I watched so many of these god damn movies that sometimes I am not sure.
Right off the bat this movie wins me over.  A score that makes me dance like a madman, not mars but still a madman.  In the opening credits there is a Frankie say relax reference. Sweet.  Best Frankie reference since Chosen.
The acting in this is fucking wow. They talk into the camera like they are making JCVD and they have about as much emotion as BTK when he was explaining killing all those woman.  The other acting of note is the yawning. The cop yawns with about as much precision as Keanu Reeves coughs in Constantine. The killer who looks like Charles Manson and thinks he is in a Jorg Buttgereit film(cuz he fucks dead people) sounds like the breather from Student Bodies.
The characters in this are also epic. The stereotypical detectives, the go get em reporter that talks about super gluing her snatch a cooch closed, and the diner owner who looks like Joe Piscopo with grease stains. Shit yeah I would eat at his restaurant.
Now lets get to the important stuff. The kills. Fuck yes they are amazing.  In your face lets cut a bitch and saw a guys head off and show you all of it. None of this pussy cutaway shit in your face like cum to Jenna Jamison's face.  The blood is bright ass red and you stand up and cheer like its the end of an eighties inspirational film every time someone gets the shit killed out of them.
This movie is a prime example of why I am glad I grew up in the eighties. No one had a shitty computer program that made them think they could be a filmmaker. The thing is they knew they weren't  and they still are like "fuck it" I got this video camera bigger than the local news uses and some red paint and girls that will get naked. Shit yeah lets make a movie.

Posted by Guts and Grog Reviews at 6:18 PM