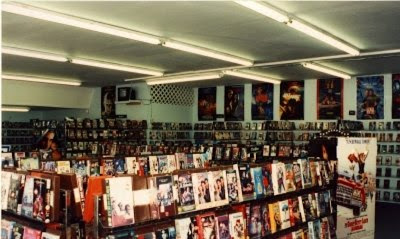 So everyone knows I love VHS and DVD. I have rambled on about ordering them, buying them hunting for them and a million other ways to get a movie. Movies are important and all the mediums they have come on in my lifetime from TV to Blu Ray. One place that I hold closer to my heart than the big black empty space surrounding it is a video store. Growing up I would spend hours looking through the horror section, the covers were art and I was an artsy fartsy figuring out what the artist meant by putting blood on the left side instead of the right.  Video stores were my sanctuary, even if I didn't have money I would go hang out and talk movies. I just felt comfortable in them, like a vagina it was a place I could spend the rest of my life in. 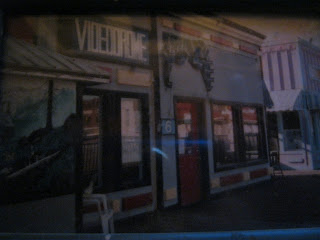 In the early part of the century Jacob Von Klingele and I opened our own video store Videodrome. We of course specialized in horror and cult and tried to get some cool merchandise like posters, shirts, accesories and anything else we could get our hands on. The Ma and Pa video stores for the most part were gone by now and it was the closest we could get. We did VHS and DVD and at first we were just sales. We were planning on moving to rentals for the hard to find but due to money not quite working the way we had hoped never made it there. We did however have a fucking blast the whole time we were open, it was a lot of work and I was working six to seven days a week at like twelve to fifteen hours, luckily for the most part work meant talking film and throwing parties and watching movies. We had a Halloween Party the year we were open with costume contest and an all day movie marathon where we showed everything from Nightmare on Elm Street to Eraserhead.

These days I am lucky enough to live in a city that still has some pretty epic movie stores. We have one of the biggest in the country with Movie Madness. Rooms and Rooms full of VHS and DVD with a museum as the backdrop. Everything from the knife from Psycho to the ear from Blue Velvet.

Things have changed and it is OK to embrace the future similar to the vampire but I for one hope home Video Stores never fully die.

Tromeric
Posted by Guts and Grog Reviews at 4:34 PM

That's really cool that you had your own store. I too have fond memories of going to the video store and picking stuff out based on the cover or who was in it. I think it went bad, not when Netflix came in, but before that with big chains like Blockbuster and Hollywood Video. They removed the personal aspect of renting videos, which made it easy then for people to turn away from them and go to Netflix. When I lived in Portland, ME, they had a great one called Videoport, with tons of sweet cult classics and a solid Criterion section. I'm pretty sure it's still open.

Nice man, I agree on the Hollywood and Blockbuster fucking everything up. I kind of enjoyed watching them fall when they did, plus I got a ton of great shit for cheap. I am OK with progress but I will always miss the ma and pa video stores.

This was one of the better ones in Philly that just closed.
It's a shame how many people are effected when they go down . . .

Thanks for sharing that. Sounds awesome.