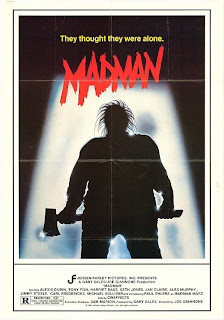 Madman is the epitome of an 80's slasher. Kids sitting around a campfire telling stories about a crazy killer and sure enough he starts killing them. There is nudity, bloodshed and people doing stupid shit.
I love Madman.  The opening song they sing around the fire is so fucking amazing I want it played at my funeral. I always think about the happy campers song from Sleepaway Camp two and while that is amazing I think the Madman song is highly underrated.  The kills in this are basic but still awesome. Lots of headless teens saying Ill be right back then getting their heads cut off like it's an Alice Cooper stage show.  There is not a lot to write. I did say it's an 80's slasher right?

Tromeric
Posted by Guts and Grog Reviews at 7:57 PM