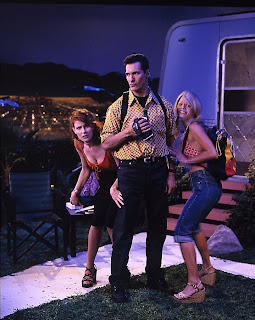 Growing up and seeing all my friends playing catch with their dads or helping them through hard times always was weird. It was like I wonder what that's like?  I am not gonna bore you with the details but as many Americans my dad was not the strongest male role model. He liked booze more than I do and I run a website based off my intoxication.  I did have my grandfather who was a bad ass and hooked me up with some life lessons. His stash of Penthouse's kept me happy and he was always down to go get a cup of coffee and pretend he cared what horror movie I had watched that week. My dad ended up meeting a fate similar to the cast of Maximum Overdrive and when my grandpa wasn't around as he spent half the year in Florida getting ready for retirement I had one man that was always there for me. My favorite trailer park living, cowboy hat wearing clever sexist horror movie nerd in the world. Joe Bob Briggs.

My first run in with Joe Bob was when I caught a late night showing of Drive In Theater at a friends house on The Movie Channel. I did not have the movie channel so from then on I tried to make it to my friends house every weekend to catch it. I always had fond memories of his rants and introductions but It wasn't till my sophomore year when I saw that he was hosting a new show on TNT. A channel I could watch in my very own bedroom. I had finally found my religion. 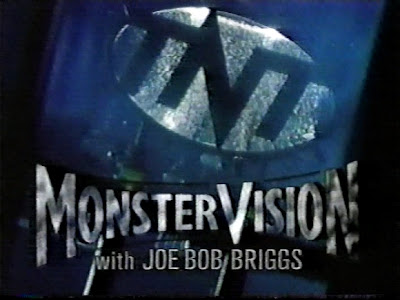 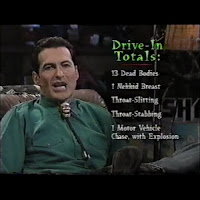 MonsterVision changed my life as it did many nerds.  I would stay up every weekend to see what he was playing and see who his guest stars were.  He stuck to mostly horror but with leap out a bit with other greats as John Waters.  I just recently watched the Hairspray episode and the back and forth with him and Waters is priceless. It does help that those are two of my favorite people in the world. I watched all I could and taped as many as I could. MonsterVision went off the air in 2000 but it still holds a place in my heart.  I miss the drive in totals.  I miss Rusty. I miss mail call, I miss all the rants about his ex wives. I miss it all. I still revisit old episodes often and they hold up. I will end up watching my MonsterVision  of Return of the Living Dead in its edited shitty quality glory instead of my special edition DVD. 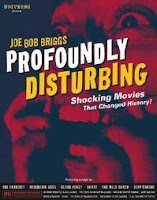 After MonsterVision was gone I still got my Joe Bob love with DVD's and Books. He did commentary on the Elite special edition of I Spit on your Grave as well as putting out some great bad movies such as Jessie James meets Frankenstein' s Daughter as well as Samurai Cop and a few others. He has written a few books including Joe Bob goes to the Drive In and Joe Bob goes back to the Drive In. He also did two in the profoundly line with Profoundly Erotic and Profoundly Disturbing(my favorite).  He also runs his website which is full of great reviews and articles and plenty of amazing shit you can buy.  In non horror related Joe Bob he had a segment on The Daily Show for a while called God Stuff that was pretty god damn entertaining.

I have always and will always love Joe Bob and hope to one day meet him.  The closest I got is he did some random ass Funeral directors convention forty miles outside of Portland but It wasn't open to the public. Someday. If you somehow missed out on Joe Bob make sure to check his website or look up clips from his shows. One of horrors most interesting contributors.


Tromeric
Posted by Guts and Grog Reviews at 11:01 PM

Even though I've never met the man, I consider Joe Bob my mentor. He's the one that made me start wanting to write about horror movies. He also showed me many of my favorites for the first time. I was another one of those nerds who had their lives changed by Monstervision.