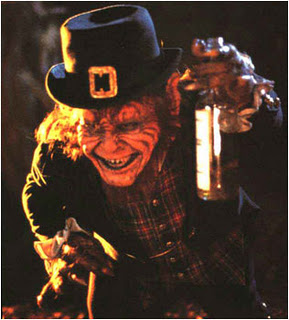 The Grog, also known as booze, alcohol, nectar of the gods, and drank. See I am not talking about the site you are reading this on I am talking about the actual "grog" the substance that some may say inspires my deep thoughts.  Alcohol and horror go hand and hand.  They compliment each other the same way Chianti compliments liver and fava beans. 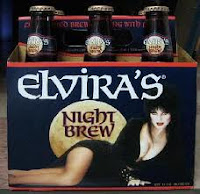 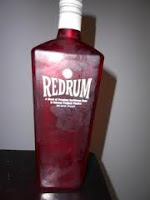 Over the years I have bought many a bottle based off what it was called. I remember years ago buying RedRum because well it was called RedRum and shaped like a coffin. I had to. That bottle got me in  a lot of trouble. It kinda tasted like ball sack but I still felt the need to buy it over and over again. I puked more redrum than Lil Kim had sperm pumped from her stomach. That's a lot in case you were wondering. I have bought so many beers because they had some random ass name whether it be something official like Elvira or just a generic zombie or Bigfoot. Recently Ghost buster and UFO believing in sumbitch Dan Akroyd took a break from not making movies to put out one of the best Vodkas this side of Russia and it comes in an amazing bottle. Yeah you know you want to drink out of a crystal skull. 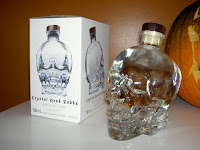 I don't know what it is booze just taste better out of a sweet bottle. As I mentioned earlier Redrum is pretty fucking gross but I still felt the need to buy it. Speaking of Rum there is one out I have been enjoying lately called The Kraken. I am not even a huge spiced rum fan but fuck me I have to drink the kraken. Rogue famous for their micro brews recently got in the booze game with most of the main ones but I myself prefer the whiskey.  I mean its no Bushmills but god damn for being in the thirty dollar range and having a skeleton on it I can't complain.

There are plenty of reasons horror and booze go together outside of title or packaging. I cannot count how many times tequila has gotten me through a movie.  Like the children I have suffered through many a shit film in large part due to my intoxication. I mean I have watched Blood Freak numerous times. Yeah Blood Freak the movie about a christian turkey monster that craves junkie blood.
One of the best things ever is having some friends over cracking open some cold ones and  having a few shots while watching some horror films, especially bad ones. It is a blissful feeling that is rarely matched.

There has been a resurgence of theaters playing old films and serving booze. This is one of the best things ever.  Talk about a perfect night.  It is probably the closest thing we will ever get to the grindhouses of the seventies and eighties.  I have recently seen Maniac, Deep Red, Tremors and many more, all while drinking.  Fucking awesome.
One of my favorite things to do and many who have followed me for a while know is have drunken marathons by myself.  I have spent many days with a bottle and a stack of movies. Sometimes it's an endurance test like watching all the Saw films, or every episode of Treehouse of Horror.  I have done many of these and they start off amazing and by the end I am insane.  The thing is I still do this on a regular basis and for some reason enjoy it.
In the end I am just saying that the grog can benefit the life of a horror nerd. It is not necessary by any means as when I was a child I did not drink that much and still enjoyed the shit out of horror. Some of my fondest memories with horror have been dead sober, however some of the best have been drunk off my ass. When we did the forty nine or fifty days of horror marathons alcohol was very helpful. When Gabe Nye the Science Guy sends me hilarious drunk pictures of figures in hats I have the grog to thank for that. When I sit outside at the bar smoking and talking horror films I thank the grog.
I will leave you with a couple of drinking games that can enhance any evening. One I have tried and one I have not but plan on fixing that soon.


-Take one drink whenever you hear the 'ch-ch-ch' music (except the opening credits, that would be way too much drinking right off the bat)

-Take three drinks if you hear it and no one dies

-Take one drink whenever someone hides instead of running

-Take five drinks if it's someone beside Crazy Ralph

-Take one drink when anyone calls it 'Camp Blood'

-Take one drink whenever someone is careless with sharp objects

-Take three drinks whenever the screen goes white after someone dies

-Take one drink for each corny line the cop gets

-Finish your beer if you spot the gratuitous beaver shot

-Take one drink each time Kevin Bacon says something manly

-Take one drink if you think the waitress in the diner is actually a man, baby, yeah

-Take one drink whenever someone barricades a door in some elaborate, Rube Goldberg manner

-Take one drink for each successive 'Kill her mommy, kill her' bit during the final chase

-Take one drink for each useless object thrown at the killer

-Take one drink for each blow Mrs. Voorhees takes to the head

-Whenever someone explains the back story of the camp

-Whenever a scene goes slo-mo

-While Betsy Palmer overacts during her speech about Jason's drowning 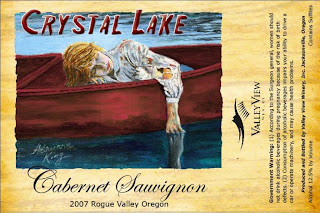 Tromeric
Posted by Guts and Grog Reviews at 8:14 PM

I wonder how long we'd last thru the Friday the 13th series before blacking out.

My buddy and I tried the Wild Zero drinking game. Shortly after his funeral, I vowed to never play it again.

Hey there. Found you on the Halloween Countdown. I am heading out Saturday to get a skull full of vodka!

@Gable- It is just for the first one. If you did all it wouldn't be pretty.

@Kev No kidding. It was insane the time I played it. One of those seemed like a good idea at the time.

@wicked- Enjoy. It is pretty damn good vodka and the skull is really nice and looks good on the shelf.

Thanks all for reading.