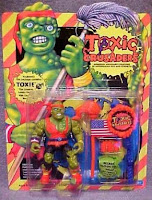 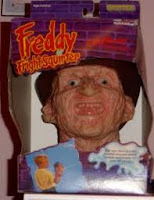 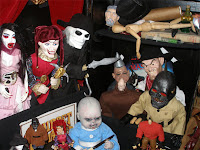 Toys and horror go hand and hand. You can assume that most horror kids are nerds and with that assumption you can take the leap that nerds love toys.  When I was a kid I would play with my toys(granted not all horror, gotta have some Joe and He-Man love) while I watched movies. I dreamt of getting a good guy doll while watching Chucky terrorize that whiny bastard. I would watch Puppet Master and Demonic Toys over and over just wishing I could hang out with Six Shooter and Blade, or have Baby Ooppsie Daisy shit her pants on my floor(i guess I found scat a young age) or wishing I had the Freddy Squirter(not that kind sicko, although that could be pretty hot).  Through the years there have been many different kinds and styles of toys, whether you are talking about the classic models from the fifties or the eighties bringing in the cartoon toys for Toxic Crusaders,Ghostbusters, or Tales from the Cryptkeeper. In the ninety's we got some pretty sweet toys with McFarlane bringing the first wave  of  more adult themed figures from modern films.  In the last decade it of course has even gotten more insane with Hot Toys, Neca, Sideshow and many more company's bringing so many figures I never expected to see. 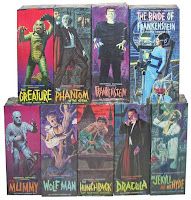 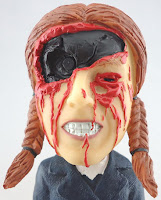 The other thing is there has been a uprising of custom figures, a few horror ones have shown up online. I saw a Deadly Spawn one that made me blow a hole out my pants and lots of classic ones. One of the Grogs contributors Jacob Von Klingele has made a few amazing horror ones, my favorite being a Sharktopus one. Wow.  As I touched upon earlier there are a butt load of smaller company's doing amazing things. One of my favorites is Cult Collectables who have been doing weird wobblers, I am not usually a fan of the bobble heads but these are a little different and so far based off such amazing films I cant help  but have the nerd boner twitch a bit. I mean The Beyond, Black Devil Doll from Hell, Demons and they have a Fulci from Cat in the Brain in the works. 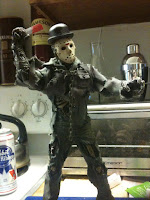 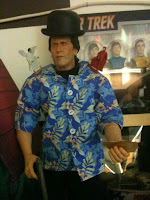 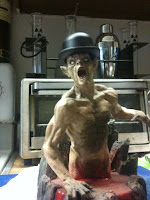 Another thing about toys is you can get drunk and have fun even later on in life. The pictures above show this.  These are from text's I have received from Gabe Nye the Science Guy where he decided some of his figures needed bolo hats that he got off bottles of gin. See you don't have to be a kid to play with toys. You just have to be awesome, and maybe slightly buzzed.  Look at that Crawler, he looks amazing in his hat, like you could go to dinner and a show with him.

I leave you with a Christmas Card I received from Jacob Von Klingele last year who also wrote an article for the grog for the top ten action figures which if you want some more toy love you should check out.


Tromeric
Posted by Guts and Grog Reviews at 7:38 PM