We Have another Top 10 list compiled by Jacob Von Klingele from Toys Can't Hurt You, enjoy the read then plan on taking a trip around town checking all the Toys r Us and Targets You can find. NERDS UNITE!!!!

Welcome to another top ten list. I’m a sucker for lists, can you tell? This time I’m giving you the 10 best action figures based in all things horror. I say this because I didn’t want to limit it to just movies. There are some great original properties out there that I didn’t want left out. I also limited this to just action figures. There are a lot of great statues, busts, and other high end collectibles, but those are for another list. All right enough yakking and on to the good stuff.
10. Norman Bates: Movie Maniacs series 2 by McFarlane Toys 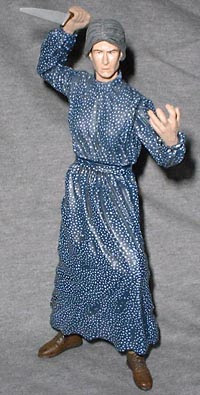 He’s on here for a couple reasons. McFarlane’s Movie Maniacs started the modern wave of horror collectibles all the way back in 1998. The first wave had all the horror icons you’d expect. Then comes the second wave and out of nowhere there’s Norman Bates. It had everyone looking for the next classic movie that would get a figure and really gave way to a lot of the figures on this list. Plus there really aren’t enough cross dressing action figures out there. You might be wondering if he’s so damn important why is he only number 10. Honestly the figure just can’t hold up quality wise with the newer figures. The sculpt and paint are second to none for the time, but just not up to snuff with modern figures.
9. Pinhead: Cult Classics Hall of Fame by Neca 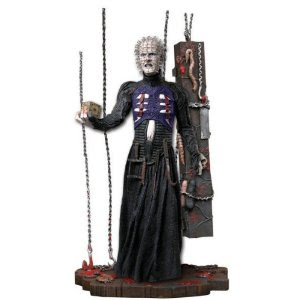 There have been multiple Pinhead figures over the years all of which have been great, but this one takes the cake. It was a toss up between this one and the Hellraiser 3 Pinhead, you’ve got to love an action figure that sits on your shelf mocking Jesus all day. The Hellraiser series of figures are what really put Neca on the map as a legitimate company for horror figures. They pay perfect tribute to that with this figure. The body and “pin” head are the same as the original release. Amazing detail in the sculpt and great paintwork. What sets this one apart is the extras. He comes with a base complete with chains and the pillar from the first movie in all it’s gory detail. The best part an alternate pre-cenobite head sporting a dead on likeness of Doug Bradley. 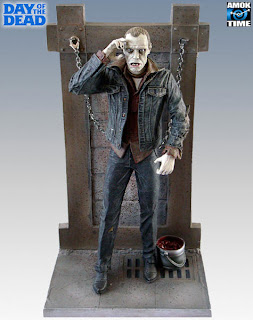 8. Bub: Day of the Dead by Amok Time
Amok Time is a fairly new company to the horror collectible scene are they should be around for awhile if all of their stuff is this good. Bub was a highly requested figure by fans for years so that alone should put him on this list, but there’s more. He sports a great likeness and solid paintwork. The real treat with him is the accessories. He has a display base complete with real chain and a slew of movie accurate extras like a walkman and a bucket of guts for lunch.
7. The Thing boxed set: Now Playing by SOTA 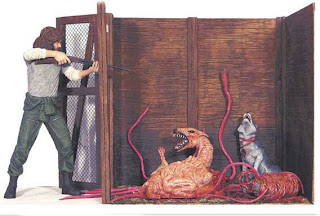 Really anything that has to do with the Thing should be on here, but this is the only one the has a figure of Kurt Russel. That is reason enough all by itslef. This boxed set recreates the scene where MacReady finds “the Thing” in the dog Kennel. There are far too few boxed sets that give us this kind of specific scene which is really too bad. This piece looks great sitting on the shelf. It’s a shame SOTA isn’t still making figures. 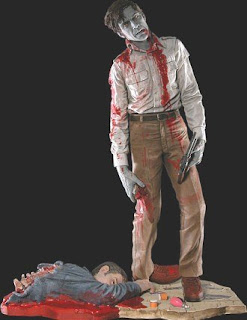 6. Flyboy: Cult Classics series 3 by Neca
Flyboy marks the first licensed Dawn of the Dead figure. This was a movie fans had wanted figures from for a long time and Neca delivers in spades. The figure sports a “killer” likeness(see what I did there?), an awesome paint job accurately reflecting the make up from the movie, a pose that stepped right out of the movie, and a beautifully gory base. There are more zombies Neca has released from Dawn of the Dead since this one, but he’s been the best. 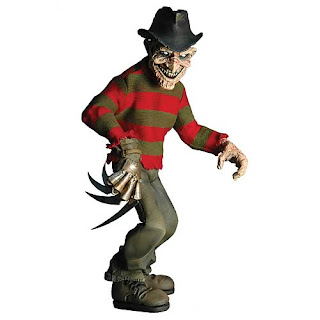 5. Freddy Krueger: Cinema of Fear stylized roto-cast by Mezco
Mezco is the current company holding the license for the big three and they have done some great stuff to keep them fresh. The best are these stylized figures. They take their cues from the urban vinyl movement of toys. Urban Vinyl or designer toys are highly stylized and artistic. Mezco has one of these for Jason, Leatherface, and Freddy, but Freddy takes the cake. He sports a great cloth sweater and a face sculpt that lets you know how badly he wants to kill some orphans. 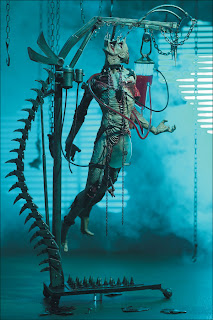 4. Talisac: Clive Barker’s Tortured Souls series 1 by McFarlane
This is one of those original properties I mentioned before. Theses figures were accompanied by a story written by Clive Barker and designs based on his ideas. This figure is a work of art. It is by far one of the goriest figures ever released in the mass market (I bought mine at Toys r Us). This figure is a perfect example of why McFarlane toys redefined modern action figures. The amount of detail packed into this figure is mind blowing. The paint is flawless. I could go on all day, but just look at this thing (it’s ok if it gives you a little bit of boner, I can’t judge). 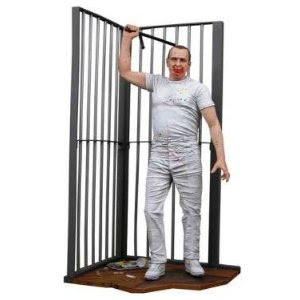 3. Hannibal Lector-holding cell: Cult Classics Presents by Neca
Hannibal Lector has been on the top of everyone’s list of figures since the first wave of Movie Maniacs came out. Anthony Hopkins wouldn’t give his likeness to a toy because he didn’t think it was appropriate. Skip ahead a few years and the adult action figure market had grown to the point where he was convinced otherwise. Neca released another figure prior to this one that is an amazing figure, but it doesn’t even come close to this one. Not only is it a beautiful figure from Neca at the height of their game, but it depicts one of the best scenes ever filmed for a movie. The likeness is dead one Anthony Hopkins, you’re almost worried to lean to close or he might eat out your tongue. 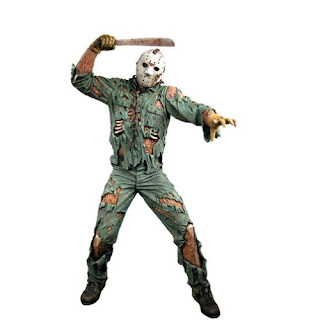 2. Jason Vorhees 18 in.: Cult Classics by Neca
This figure is beautiful. He’s gigantic, he makes the classic “ki ki ma ma” sound, he comes with several different weapons, and represents the best Jason design in my opinion. The larger scale of the figure really lets you appreciate the sculpt work that went into this work of art and the paint only backs it up. His mask is removable to show off his beautifully undead face. There have been roughly 5 kabillion Jason figures at this point and some of them are as good as this figure, but his sheer size puts him at the top of the pile. Jason is a hulking mass of raver killing badass and this figure perfectly captures that. 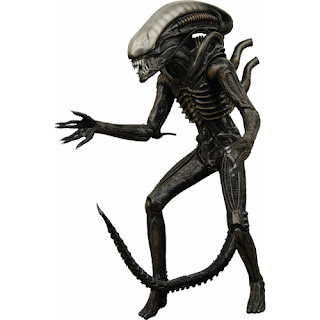 1. Alien 18in: Cult Classics by Neca
This figure is not only my choice for the best horror figure ever, but he’s up there for all figures in general. There is nothing not to love about this figure. It perfectly captures Geiger beautiful design. His Alien is one of the best monster designs of all time and that’s captured here. You can’t fully appreciate this figure until it’s sitting in front of you. The paint work in so subtle, but it should be. He looks like a slimy, creepy, scary as shit killer. The head is the real highlight of this figure. From the extendable second set of jaws with soft plastic tendons to the clear dome showing off the exposed skull underneath. I should mention that Hot Toys has an incredible 12 in. Alien. I had a tough time deciding which one to feature because it’s a toss up between the two. I finally came to my decision based on the fact that I own the Neca one and my brother owns the Hot Toys one. There’s no way I could let him have the number one figure on my list.
Well that’s it. This one was a little more serious and more long winded than my last one. Toys are the one thing I can ramble about all day so it’s your fault for getting me started. There were a lot of great figures that didn’t make it on this list, but I tried to keep it diverse. Hell I could do a list of just Jason figures at this point. I hope you liked it and let me know if you didn’t, and remember these are adult collectibles not toys(it’ll help you feel better about yourself when you go to buy them).
-Jacob Von Klingele
Posted by Guts and Grog Reviews at 2:52 AM