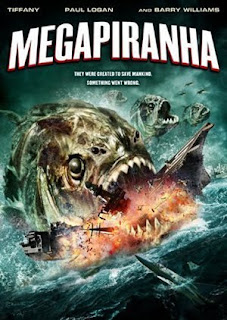 Have you ever seen a Piranha the size of a short bus jump in the air and catch a falling soldier as if it was a tennis ball? Well I have. Now that we have established that I am better then you lets get to the review. Some things you need to know, the Asylum is a bad-ass company they are kind of brilliant. They take 10 dollars or so and steal other movies that have cost way more and make them awesome. Sure I could watch Snakes on a Plane, but I could also watch Snakes on a Train. They get washed up celebrities to make appearances and I eat it up. Debbie Gibson was in Mega Shark and Tiffany graces us with her presence for the Gem. I think were alone now, nope their are some big mutha fucking piranhas that are gonna eat your balls. The cinematography looks similar to the Genesis version of Echo the Dolphin, and the helicopter scenes are straight out of the Air wolf game for the NES. How can you actually review this, you cant, luckily I'm not known for my abilities to "write" or "think" I'm here to get drunk and type a bunch of nonsense that I can disguise as a review. Its like a decoder ring. Do you know what the fuck I'm saying? I don't half the time. Ill translate. Mega Piranha is really really bad but also really really awesome at the same time. It's like the S & M of Creature Features.

Tromeric
Posted by Guts and Grog Reviews at 2:16 AM