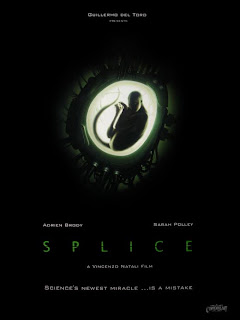 So I want to review Splice, I'm gonna be honest. That's about as difficult as getting a Dendrophiliac to take his dick out of the Redwood in your front yard. Ill sum it up as much as I can without giving away to much. The Pianist and the chick from go create some Turd looking monsters that slug about, they are stoked. The crazy boss lady says lets do some bullshit instead of making a super freak, they are like fuck that we will do it anyways. They figure out that bad music is holding them down so they switch it up and come up with a workable sack of slime. They argue and joke bout not letting it come to term but they do it anyways. The Pianists brother who looks like Dawn Wiener is suspicious. Baby Mc Slime sack stings the shit out of mommy as if she was one of the extras on Tailsting. It's alive, and it looks like Corky's dick and Kangaroo Jack mated. Blah Blah Blah It learns things and goes crazy. Why am I even bothering to describe this, I cant go much further without ruining it. This movie is crazy, Its entertaining, its interesting, its kinda confusing and it will make you stand up and scream at the top of your lungs what the fuck just happened? Is this a masterpeice? I doubt it, but it is something different and interesting in a time of rehash of rehash.

Tromeric
Posted by Guts and Grog Reviews at 10:20 PM