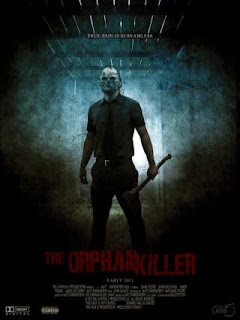 A modern slasher with some religious overtones. I am going to break this movie down Clint Eastwood Style.  Make sure you read the whole thing though.  Good + Bad + Ugly doesn't mean you shouldn't watch this.  My math is tight and I am about to tutor your ass.


The Good-  The Effects are fucking awesome. Old school, dirty blood red, pretty much all practical and broooooooootal.  Each kill is crafted with precise attention on everything that it should be. Head bashing's, stabbings, slicings, punches and kicks will all tear your face off.  Hammer Smash Face to a priest was epic and half naked woman wearing a crown of thorns is kinda sexy.
They definitely tried  to make this a unique slasher, it's laid out very differently than most films one might compare it to. I would assume this didn't have the biggest budget but they used what they had wisely.  Some great use of sound(not music but we will get to that later) and camera techniques. It had a old school vibe while still trying something new.  There is definitely a lot to praise here but not God has he made this monster. Speaking of it was really bizarre to see the clergy involved in sexual acts with partners the age of consent.  Nuns and BJ's help make your movie way cooler, take notes everyone.

The Bad-  By far the worst part about this for me was the music.  It starts off with some bullshit cover of Cry Little Sister from The Lost Boy's.  It's bad.  In fact the soundtrack is most definitely the worst part about this movie.  I think they got all the rejects from Ozzfest's second stage to do the music.  I am personally not usually a fan of songs in films, I prefer score. The only time I like songs is if it's used for the movie, like they are at a party and you hear what they are hearing. That makes sense, like Angela in Night of the Demons. That was awesome.  I just think score is a much more effective soundtrack, to each his own though.


The Ugly-  The Orphan Killer. This dude got raped by the ugly tree. His mask looks like a Sunday School class made a Slipnot mask out of paper mache.


Overall if you enjoy slasher films of yesteryear and don't mind a little modern touch in there you should check this.  It will not change cinema and there are some flaws but fuck it not every girl I have been with is a ten.

Tromeric
Posted by Guts and Grog Reviews at 11:34 PM