Growing up if there was one company that I would always look for at the video store it was Full Moon.  Once I saw Puppet Master I was addicted.  I would just look for that moon. Ninety nine percent of the time I went home, watched the movie and shit my pants out of joy.

If New Line is the house that Freddy built Full Moon is the house that Blade built, with some help from Torch, Six Shooter, Leech Woman, Pinhead, Jester and Tunneler. Puppet Master may be their most famous but it is not where Full Moon stops.  Look at the Subspecies series. Radu keeps sucking the life right back into that series.  It even recently was awarded a Blu Ray release.  Let's not forget Trancers. Tim Thomerson could kick my ass any day of the week. That is just the series. They also put out some of what are still my favorite stand alone films.  Bad Channels is a perfect movie.  Sykotik Symphony is amazing, Blue Oyster Cult didn't try and find out who their pussy fans were and the aliens rule my balls.  Castle Freak is always a must watch and Stuart Gordon also did the Pit and the Pendulum with Jeffery Combs.  In the eighties and ninety's Full Moon had a hold of me. 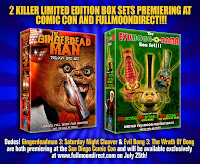 Once they lost their partnership with Paramount you definitely saw a drastic change in budget and quality. This is a time I just kind of forget. There were a few exceptions like Witchhouse which I have a weird soft spot that would make a baby jealous( I don't know what that means either).
These days Full Moon is at it again.  Sure it might not live up to some of the eighties and early ninety's films but they are back to being awesome. Killer Bong, Killjoy, and my personal favorite Gingerdead Man. 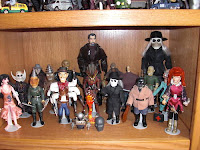 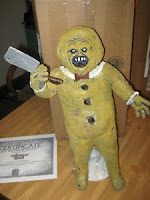 One last thing I want to touch on is Full Moons toy line. I know I have went over it a bit before but I was obsessed with all their figures.  Puppet Master, Radu, Castle Freak and these days they have all their replicas which are insanely amazing and I want all of. The Gingerdead Man one is amazing, Evil Bong, and all the battle damaged puppets.


Full Moon has always been there for me when I needed a less than perfect but fun ride. Kind of like that person you call, you know who I am talking about, anyways they have made it a long time and should be saluted like your shorts. This is just a quick overview of my life with Full Moon. I suggest you go over to Mr. Gable's Reality if you want some more Full Moon love.


Tromeric
Posted by Guts and Grog Reviews at 4:28 PM

You are awesome! Full Moon DOES deserve it's own post! My favorite movie company. I'm so excited for their future, they keep getting better and better!

I have checked it. I watched the streaming of the launch. It was pretty god damn boring. Stoked on the site though.

I love Full Moon, they're to horror what Cannon and PM Entertainment are to action-- though Full Moon is still around! I need to do more of their films, both revisit the ones I remember as a kid, and check out new ones I've missed. Great stuff!

Yes you do. I would love to hear your take on some of these. Early full moon is such a staple for me and the new stuff has been awesome in its own way.