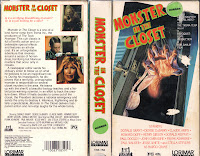 It is safe to say that one of the biggest influences on me has been Troma.  I saw Toxic Avenger when I was a wee little lad on USA Up All Night and was hooked like Dustin Hoffman in that Spielberg movie. Speaking of Hook, I ended up seeing that in the theater as I was trying to sneak into Candyman and got caught so I had to go into the movie I actually bought the ticket for. What a bunch of shit,anyways back to Troma. After Toxic Avenger I saw the sequels and Class of Nuke em High, Sgt. Kabukiman, Troma's War, Tromeo and Juliet. One of the big Troma films that wasn't a Lloyd Kaufman film that I have the fondest memories of was Monster in the Closet. I also saw that for the first time on Up All Night and fell in love. I taped it off the TV and watched that shit so much. I was like a stalker. I would sneak up on the movie, slip it some drugs and tie myself up while watching it. OK, so maybe that's not all true but I did fucking love it.

I would go to the video store and rent anything with that Troma logo on it. When I got home and put in the tape I would hear the music, you know the music and see that backdrop of New York and would cream my pants. Seriously, like cream of wheat but with way more power and excitement. Lloyd Kaufman and Michael Herz present was my bible only less made up.  I was convinced that anything Troma put out was great, that all changed but I will get into that later. The stuff Lloyd did was my favorite but there were still some other films that I loved. The aforementioned Monster in the Closet, Combat Shock, Redneck Zombies, Rabid Grannies, Killer Condom which is one of the most bizarre Troma films, not just because of the subject matter but because it is not at all what you would expect.  When I think back to early Troma films the one that stands out is Cannibal the Musical. I bought the VHS at a local comic book shop based off the title and I recognized the names of the director and stars. It was Trey Parker and Matt Stone. South Park had just hit and it peaked my curiosity. I of course also saw the Troma logo so my boner made me buy it. I watched this movie so many god damn times.  The songs were amazing, it made me laugh more than I thought possible and it was just a fucking blast. I have heard that Lloyd turned down South Park because he thought it would cost to much and that it wouldn't be all that interesting to people. Not sure the merit behind this but I can only imagine if Troma had the rights to South Park. It would be like an alternate reality story, like Superman: Red Son but with less commies. 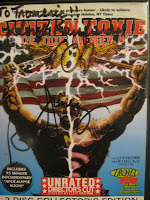 Once DVD hit the scene my love for Troma reemerged. A friend of mine bought me the two disc Terror Firmer and Gabe Nye, Jeremy Gaulkenstein, Jimmy Caution and myself put it in and lost our shit. I was laughing so god damn hard I couldn't breath. It was like the best orgasm ever, luckily I remembered the lemon so I woke up when I came.  It was like a whole new Troma.  Terror Firmer is also where I first saw the trailer for Citizen Toxie: The Toxic Avenger four.  I was as excited as a Nekromaniac in a morgue.  I watched this trailer so many times and couldn't wait. It took a few years but It finally was released to DVD and I woke myself up right when Borders opened, well when Jeremy Gaulkenstein told me it opened, which was wrong even though he worked there. I waited in the parking lot for like and hour smoking cigarettes and waiting impatiently and it finally opened. I took it home, watched it and yet again came in my pants.  The group was divided on this one. Gabe Nye and I loved it while Jimmy and Jeremy weren't so fond of it.  It wasn't to long after this that Jacob Von Klingele and I made a trek to Portland(I still lived in Yakima at this time) to meet Lloyd. He was gonna be giving a lecture and signing his new book Make your own damn Movie. We made all the arrangements and drove the two hundred miles. His lecture was awesome and he was hilarious. I got my copy of Citizen Toxie signed and that folks was a historical moment. He signed it to the moniker Tromeric which of course has become my name. Eric fuck that, Lloyd says my name is Tromeric. I will not argue.

Tromeric
Posted by Guts and Grog Reviews at 10:09 PM

No matter what anyone thinks of the movies themselves, no on can argue that Kaufman hasn't been an important and influential dude with regards to independent film making.

Ditto on the good stuff. Troma has been a huge influence on my movie watching; and it's awesome to find out your name Tromeric came from the man himself, Lloyd Kaufman. Really cool.

Thanks a lot guys. Appreciate it.