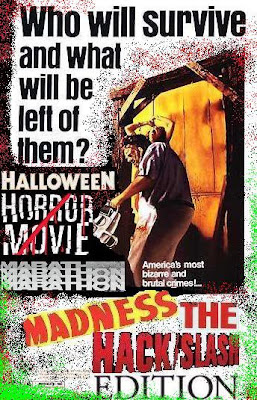 Marathons have been huge for me over the years.  I have mentioned the forty nine and fifty days of horror many times. I have done marathons for many different series at the grog and right now I am involved in a marathon/competition called the madness.
When I was a kid my first memories of marathons would have to be going to the local video store and they would have the five movies/five days/five bucks deals. I would get my five bones and pick out five horror films, usually with a theme and take them home for the weekend. I would sit down and just engulf myself in movies for hours. I usually had to go back on the second day and get another round as I did not need five days for five movies, I am a bad ass. This would continue for years and would get me read for whats to come.
The forty nine days of horror started because Gabe Nye, Jeremy Gaukenstein and I along with some others were sitting at a twenty four hour diner in Yakima, WA called Mel's Diner, not DIEner unfortunately and decided we should do something epic for Halloween. We always would end up making random list's while we were there as I touched on in a previous entry in the indoctrination. Well we decided we were gonna do a marathon and make it epic as shit, yeah that epic.  We figured out that there was a Friday the 13th coming up and that there was forty nine days in between the thirteenth and Halloween. Gabe Nye figured that one out for us, he's the mathlete.  We sat there all night making lists of movies.  I was living in a dank ass basement with Jeremy Gaulkenstein and we just rocked it.  Every day we would wake up, get forties and watch horror movies. This is where I found a lot of the movies I love today that I hadn't seen as a child.  Some were amazing and some painful. We tried to keep count of our cigarette and forty intake and within a few days realized just how unrealistic that was.  In the end I think we ended up watching two hundred and something films.  We had books and books of reviews and quotes that Jeremy would save on his laptop(which was insane that he had, at that time they were a lot less common) and set as the screen saver. My personal favorite I remember was "Ken Foree went down like Mcauly Caulkin" We also would assign each quote to random people like Jesus H. Christ and Scott Bakula. In the end our house smelt for like an asshole than usual and we had so many bottles and cigarette butts to dispose of.
The next year we were sitting in the same diner and were talking about how much fun the forty nine days had been and decided we wanted to do another Halloween marathon but on a much smaller scale. Well after we started on the god damn list's we ended up with fifty days, we started on the twelfth since it wasn's a Friday the 13th that year and the twelfth is when Cabin Fever opened which was a movie we were all super stoked on. We did more daily marathons during the fifty days.  We did the classics like Nightmare on Elm Street, Halloween, Texas Chainsaw Massacre, Hellraiser, Puppet Master and of course Friday the 13th. We also did many theme days like cannibal day, Italian day, Naked Massacre night which Ill touch on later.  We were a lot more Hardcore this time around, we were pretty much Richard Kern.  We ended with like four hundred fifty films this time. It was insane.  This one we watched in a single wide trailer which was pretty classy.  We again had books and books of review that we were gonna put out in a book but we lost all the reviews from both years in an epic flood I had in the middle of winter in that same trailer.  I won't go into detail but I will say that I was in my underwear soaking wet in front of a trailer in December. John Waters would of filmed the shit out of me.
I am doing a competition as I mentioned earlier called the madness. I am just starting week three and it has been insane.  I work a lot more than I did back ten years ago and this countdown has taken a lot of time.  I am watching movies as much as I can and I  still can't get into first, granted I have some pretty insane competition. 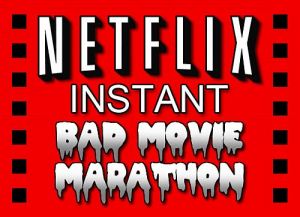 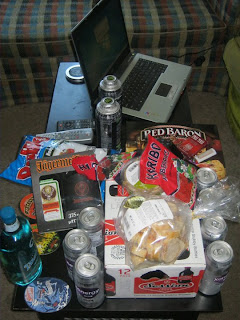 I know I have mentioned the Netflix marathon before but that has become a monthly staple in my life.  Get some drinks, some snacks, and add three horrible movies and you get a great fucking night.  Watch the movies, make fun of them with lots of other bad asses while getting drunk and you have a perfect evening.


I will leave you with a couple of marathons that are fun or painful or both.  I take no responsibility for the outcome if you try any of  these.

Toe Tag pictures night-  Toe Tag makes films that even the most experienced horror nerd will cringe at. Blood, shot, vomit and all the other beautiful things. Watching all of these in one sitting will make you feel like the worst and best person ever. 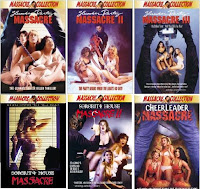 Naked Massacre Night- This is as awesome as it sounds.  Get some friends, try and mix in some pretty girls or guys depending on preference, get naked and watch all six of the classic massacre movies. You could make this even longer as there are more movies with massacre in the title than Mexican babies in a rated R movie. 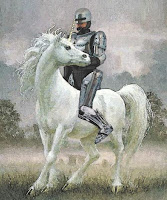 Getting Robo'd with Robocop- This is not one I reccomend unless your insane and wanna feel like shit. I however had a blast but I am a sick bastard.  Get a bottle of Robitussin(check and make sure it has the good stuff) drink it and watch all five, yeah five Robocop movies.

Tromeric
Posted by Guts and Grog Reviews at 6:41 PM

Marathons are one of my favorite traditions for horror movies. I've done so many (though never 400 movies in 50 days) over the years. The 365 project was my magnum opus to all the glory. I've since mellowed out a bit (much needed), but I've already got about 30 movies down this month. I think I'm back.

The Robo one has to be one of the least healthy and most awesome things you can ever do. I remember one time doing Edward 40 hands and having to finish both before Killer Klowns was over. And a that age, a 40 would would have me stumbling around like the dumbshit teen I was, two of them and I was sideways sloppy. Eventually, we started we grew into Mad Dog 40 hands, which didn't even make sense unless you wanted to puke neon colors. That shit was like the 4loko of old.

Nice call on the Edward 40hands one. I have had my fair share of Mad Dog nights. Always a horrible idea.

You just can't beat a good marathon. It's my favorite thing to do! Especially since I hardly get the chance to run through a bunch of movies anymore.