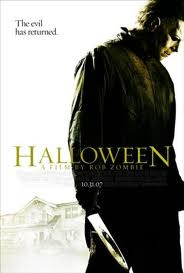 So I am not going to take the time to argue that this should of never happened.  It was pointless and there is so many things Rob Zombie could of done besides waste his time remaking one the best films ever made.
I will say if you can ignore that and just want to be entertained this will do the trick, especially if you have spent twelve hours straight watching the downfall of the Halloween franchise. Rob Zombie definitely splits people down the middle and that's fine.  I tend to enjoy his white trash broooooootal take on things, again he should of done something else but I guess I am going with the if you can't beat em join em approach.  If you judge me try watching all the original Halloween films back to back.  I just became a mathematician and figured out a formula.
Revenge+Curse+H20+Resurrection= the rotten foreskin off of John Holmes's  Aid's ridden cock which is < horrible than Rob Zombies remake.


Tromeric
Posted by Guts and Grog Reviews at 12:40 AM