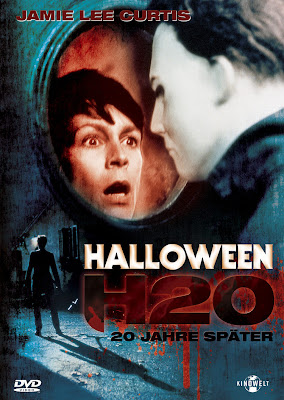 The producers of Halloween strike again.  This time instead of not having Michael Myers in it or having him be the byproduct of a cult of druids they decided they would just ignore all of those and more and just skip ahead twenty years past the end of two.  Why not?        Jaime Lee Curtis returns along with a list of 90's supertweens such as Josh Hartnett, Michele Williams and Joseph Gordon-Levitt, not to mention L.L. "I took a brake from knocking people mama said not to knock out" Cool J.
This is a 90's film.  It feels, looks and sounds(gross) like a 90's film.  The 90's mind you is the worst decade ever in horror.  In contrast this is far better than the last two pieces of elephant bukake in the Halloween franchise.
My brain is fucking melting from this but after revenge and curse I welcome this shitty cash in. If you don't have anything else to do there are worse ways to kill a couple of hours, however there are much better ways as well.


Tromeric
Posted by Guts and Grog Reviews at 10:28 PM