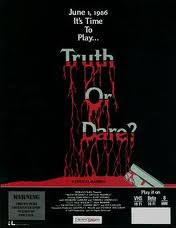 I remember renting this from the ma and pa video store down the road from me when I was like 10.  It has always stuck in my brain but never got around to watching it again till now.  This dude catches his wife with another dude stuck inside her. He freaks out and go to the mountains and freaks the fuck out and plays, you guessed it truth or dare.  He unlike me when I was a kid decides instead of getting the girl in the sleeping bag or to tickle his little balls hes gonna go all USA network secret cutting and rip his tongue out and shit.  Ranger Rick finds him and he gets sent to the tard ward.  Reagan had cut funding so he is released where he just goes and kills his wife's new fuckadoodle and try's to kill her. He gets sliced like Joan Rivers face and gets sent back to the crazy shed.  He escapes transforms into a bunch of different people and goes and fucks shit up.  He drives into the future and steels Michael Myers mask from Rob Zombie's  Halloween and then goes on an old school 80's slaughter.  He chainsaws a little league kid that probably just got molested anyways he decides that 3 old people at a bus stop are columbine students and mace to the face on a old bitchy lady that looks like Mrs Ochmonek  from ALF.  This is an 80's horror film. It's not that good, its slow at times and there are tons of tits and long shower scenes and dead body's.  This is the era I grew up in and loved and still love.  You dont need lots of money or a good story or talent, just get some girls to take a shower and kill some stupid people in various ways and Ill pay to see it.  Final thoughts. A lot of fun for a shitty movie. Get some Camo 40's and sit back and waste 90 minutes of your life and be happy you did.

Tromeric
Posted by Guts and Grog Reviews at 7:59 PM

A+ review guys. this is the sorta rundown that makes u wanna hunt the movie down with extreme predjudice then suck a few slabs of the cold shit back with wings & pizza while u watch it.

fuck. me running. i'm so onto Truth or Dare for the weekend.

Glad you liked it, hope you get a chance to watch this clasick.