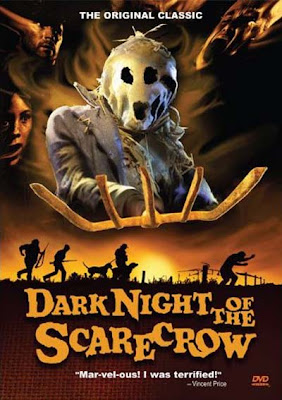 Fuck you answers.  I love the 80's as far as horror films go for this very reason.  Dark Night of the Scarecrow is a made for TV movie from 1981(TV was so much cooler back then)which is only like a little over a year past when I cut myself out of my moms.  I was one, that's one year past the age of rape consent in some country's.
Dr. Giggles is a sped.  He is friends with the McPoyle sister.  One day they are playing and she gets hurt, all the locals assume he did it, obviously he did.(oh rednecks) They chase him and turn him into a scarecrow and shoot the fuck out of him.  Oops, I guess a dog hurt her. Lucky for the dicks responsible in 81 judges dont give a shit about lynch mobs.  It happens.
These fucks are set free like Dead Prez and shit starts to happen, one guy has a psychic vision of Fargo, one guy drowns in a big vat and Rick Moranis doesn't show up to drink 8 gazillion ounces to save him and a gas stove explodes as if it was an atomic bomb.
I was worried that this wouldn't hold up, albeit not perfect it is a lot of fun and takes me back to my hood, and by that I mean childhood not the area I was raised in and bought shit at the corner store from but before I was in my teens motherfucks.

Tromeric
Posted by Guts and Grog Reviews at 7:45 PM

I did this one a while back. Love it, nothing like a country bumpkin going ape on a bunch of redneck f*cks.

I love that even though my review starts with the word fuck and is full of other "choice" words and talk of baby rape you are still polite enough to censor yourself. You sir are a gentlemen and a scholar.