So it seems like something happened in 2001, what was it?  I was told we would never forget.  Everyone is full of lies.  So one of the Duke boy's is sworn in as president and he forgot to train his friends how to fly a plane. Oh and Anthrax makes their comeback.  Joey Ramone says goodbye to this wonderful world and Dale Earnhardt causes sales in Schmidt's beer to skyrocket.  Douglas Adams stuck his thumb in the air and a plane killed Aaliyah's career before Queen of the Damned did. 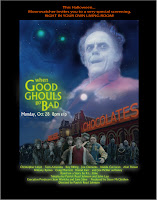 So what happens when you team up the director of Spaced Invaders, the writer of Goosebumps and Christopher Fucking Lloyd? One of the most bad ass made for TV kids horror movies ever, that's what mother fuck.

David Caruso may be a hack but this movie still made me shit my pants a little bit. A good start for Mr Anderson.

This movie sucks, it's total garbage. Love it. The kills in it are so much fun and well, Jason flies  through space and kill's David Cronenberg in the same movie.

Does anything even happen after the opening scene of this? Well yes but who gives a fuck.

Gordon does Lovecraft best and this is one of Lovecraft and Gordons best. You do the math. You fucking Mathlete.

Oh my Christ. Del Torro is such a bad ass. So fucking mind blowing. 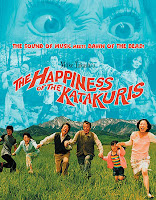 4. The Happiness of the Katakuris- Takashi Miike

It was the year of Miike and this movie made me punch Corky in the face.  The Von Trapp's meet Romero meet Japan. I shit a brick of badassness when I watched this.

Wow, This was the year of Miike and this movie was so fucking bad ass. So much blood and arterial spray like mo fucker. 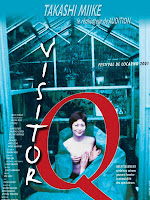 Wow. So much crazy and Milk. This is right up there with Audition as far as my favorite Miike movies go.  When I was done watching this I had to restart the shit.  This is what cemented Miike as a fucking genius in my mind.  Don't be  a bitch and watch this fucking brilliant take on reality TV.


Well there is 2001 the happiest year in American history, oh wait...anyways up next is 2000 a year full of Toxic Waste, Serial Killers and Death.


Make sure you check out 365horrormovie's list for a much different take on the year.

Tromeric
Posted by Guts and Grog Reviews at 3:59 AM