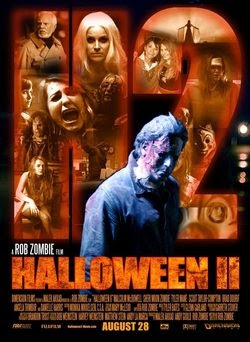 Rob Zombie has lost his mind.  Which is fitting as I have as well.  With the first remake he did he was criticized for many things one being that aside from the first little bit where he wasted time explaining why Michael was crazy it wasn't nearly as "different" as he had eluded to.  Well for the sequel he gave everyone a big Fuck You and just pulled a bunch of shit out of his ass.  Halloween 2 is a love it or hate it film.  It is not that "good" but is so fucking out there I can't help but enjoy it.  The brutality shown in it is impressive as well. Don't get me wrong it's no August Underground but the amount of stabbing Michael pulls off is pretty impressive.  Anyways I don't have it in me to pick it apart or give it praise I am just glad I survived my 16 hour Marathon and I definitely dont mind going out on this compared to some of the other shit I have suffered though today.