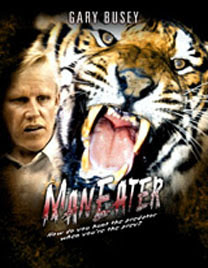 The Gingerdead man himself Gary Busey takes on a tiger that is well, a man eater.  I went into this expecting a made for TV shitty movie about a tiger that eats people. Low and behold that is what I got, what did surprise me though is the lack of CGI and somehow Gary Busey pulls of the best acting he has done in a long time. Actually everyone in this holds their own as far as acting goes.  No one will be getting an Oscar by any means but compared to say Grizzly Rage or The Swarm I gotta admit I was impressed.
So the basics are Mr. Busey is the Sheriff of some shit hole town where you guessed it a tiger gets loose.  Then you have some kid that is brought up in a trailer with his crazy ass mom who wont let him play with all the other little boys or go to school or do any of those weird things kids do like socialize or learn facts.  The interaction between these two is priceless at one point the mom says something like "while I'm at work no make beleive just read your bible."  I guess she doesn't realize that the bible has more fantasy and rape than Deathstalker 2.   Next up we have a dude with possibly the coolest mustache ever.   He has shown up from England to have tea and crumpet's and listen to music on his record player, oh and kill a tiger because obviously that's what he does.  The Tiger keeps killing people and eating them, except the little boy.  I thought Christians were suppose to get fed to tigers, oh that's lions. My bad.
I am a sucker for giant or killer animal movies. I don't really care if they are good or not I always enjoy this shit, except for Spiders 2, that made my butt hole bleed.  While this is no Burning Bright(a killer tiger movie that was surprisingly effective) it is put together with way more suspense and entertainment that it has any right to.   If you want to have 90 minutes spent watching Busey be crazy and tigers eat some folk then boy have I found the movie for you.

Tromeric
Posted by Guts and Grog Reviews at 1:21 AM