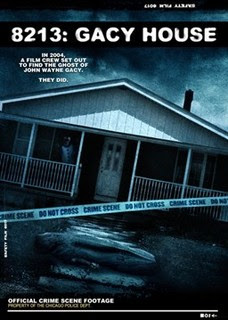 A slow useless night at work was over and my brain was pondering what the fuck was I going to do?  Paranormal Activity 2 was opening and having a midnight screening and while I do want to watch it, it seemed like it was going to be crowded and I just wanted to kick my feet up, crack open a cold one(a beer, not a dead naked woman), and like Frankie just relax.  Well I opted for plan B so as I was looking through my pile of films to be watched and skipped over many films with tons of potential to become modern classics I saw Gacy house and knew right away.  My fate was sealed.
Gacy House is what you expect. It is a found footage film done by the asylum where the ghost of John Wayne Gacy is out to trade in his little boys for a group of ghost hunters.
It's like this, I can't tell you anything to sway you one way or the other.  Do you like found footage movies? You will probably like this.  Do you like serial killers?  You will probably like this.  Do you like the asylum?  You will probably like this.  Do you like all three of these?   You will blow a load all over the inside of your pants .

Tromeric
Posted by Guts and Grog Reviews at 1:40 AM

[rec] is about the only damn film where that crap really worked for me. i've done cloverfield twice, and it's ok... ish.

must admit the storyline & topic for Gacy House are def the shit. just hope the same holds true for the cinematography. well, not shit meaning shit...

You can get Gacy House and two other Asylum titles right now for only 19.99 at www.store.theasylum.cc !!