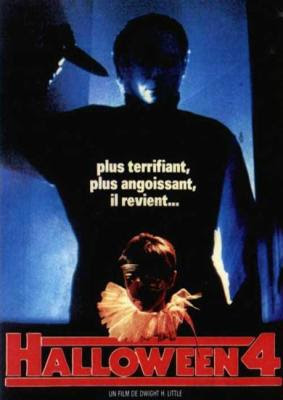 The producers realized that not having Michael Myers in a Halloween movie may not of been the best idea financially speaking, so as the title hints at he has come home again.  I have very fond memories of this entry albeit not a "good" film it is a lot of fun.  I remember the first time I watched it I was over at a friends house it was like 2 AM we had the house pitch black and his grandma was passed out in here moth ball filled room.  Michael Myers raised his knife and at that moment the loudest phone you have ever heard in your life rang and scared the fucking bejesus out of me.  I clenched my sphincter as tight as possible to stop the flowing spring of fecal matter fighting to get out. Anyways aside from that there were a couple good kills and scares as well.  Now that I have shared a portion of my upcoming autobiography I will move onto the film that stands on trial.
It is ten years since Michael Myers escaped and killed some kids and terrorized his sister that somehow he found. Dr. Loomis is still at it and Michael escapes again.  Well naturally he heads back to Haddonfield where he naturally has some more kin he found out about.  I guess Laurie dug up Ben Treymer's body pulled a kissed and made a baby, then said baby got adopted and went back to Haddonfield where she coincidentally bought the same clown costume that Michael wore when he hacked his sister to death after some weird V.C. Andrews shit went down. This is where I would make a Last Boy Scout reference, but I can't as 365horrormovie beat me to the punch.  I guess I kind of did anyway. I am such a cheater, hopefully a film crew doesn't catch me in the act and broadcast it to a bunch of woman who enjoy watching that kind of thing.  Anyways back to Halloween 4.  Loomis is back for the attack and since most of the police force was taken down he feeds a bunch of rednecks cases of Schmidt beer and they get in their four by fours and go out on a hunt.   All in all its not a masterpiece, it wears its flaws on its sleeve.  It is however a fun ride and far better than what is to follow.

Tromeric
Posted by Guts and Grog Reviews at 6:39 PM

The Halloween 4 theme music gives me an epic hard on.