Night of the Demons- Adam Gierasch 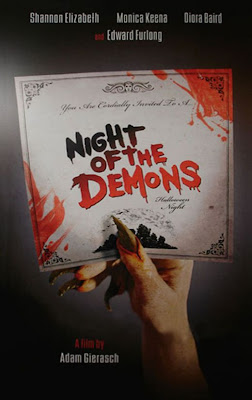 As a rule remakes make me wanna take that cock piece from Se7en and recreate that scene from A Serbian Film, but every once in a while from time to time one comes along that I enjoy the shit out of.  This is one of those.

John Conner goes to a party to deal some drugs and take a break from being in christian horror films and runs into a whole crew of amazingly beautiful horror babes slutting it up because that's what you do on Halloween.  A story is told, demons get loose and possess some bitches and chaos(not that shitty last house wannabe movie) ensues. You know what?  Who gives a fuck?   Linnea Quigley has a cameo, and like I said earlier tons of beautiful horror babes strut their stuff and they take the lipstick trick to a new level.  It's like warping to level negative one, it doesn't make any sense but it kicks more ass than Andrea Yates on mothers day.

The music is so fitting with such great acts as T.S.O.L., Goatwhore and Creature Feature.  The effects are somewhere between mediocre and awesome and the acting is delivered surprisingly well.

All in all this is a great homage to the clasicks of the 80's and pays tribute without insulting the original.  It is a party movie.  I want Andrew W.K. to show up with an eight ball and a case of tall boys and we will party till we puke.  Party, Party, Party.

Tromeric
Posted by Guts and Grog Reviews at 5:56 AM