The Loved Ones- Sean Byrne 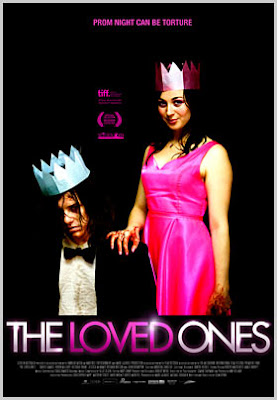 I love Australia!  I love all the old ozploitaition movies from back in the day and in the last decade Greg Mclean reinvented it with Wolf Creek which I stand by as one of the best films of the last decade.  The Loved Ones is the newest adventure into the land down under( I said that in the Men at work voice FYI) and it will rape your face off as many times as Tori Amos has written a song about being raped.

As I have said many times I dont wanna ruin anything so plot wise I will not go into details.  Surprise is such an important aspect of film for me and I hate to be the one to ruin said surprise.  It's like telling your girlfriend that you are gonna pull a Houdini on her.  It's not as effective.  I will give a brief synopsis which is depressed dude gets invited to prom by the Mick Taylor of high school.  He has other plans so she gets her V.C. Andrew fan of a father to help her kidnap cutter mccuts and changes his plans for the prom.  This sounds simple and basic I know, I promise you it's not. As I said, I don't wanna ruin it so that's all you get.
The Loved Ones is unrelenting while not being excessive. I don't wanna get into the torture porn debate, everyone has their opinion on it and that's fine.  I will say I tend to get bored with most but have been pleasantly surprised by some as well. I would not even put this into that catagory but many will and with good reason.  It does however have so much more going on. Blah Blah Blah, as I said this is in it's own world and that is what I love.  It is so well acted and directed that you forget how fucking broootal it is, then Bam, just like Mel Gibson's girlfriend you get slapped across the face.  The main kid in it starts off pretty irritating and douchy and while you would think that you would kind of enjoy watching him suffer he does such an excellent job that you sympathize with him and even with very little dialogue he sells every bit of pain, fear and strength that he is forced to deal with.  The amazingly sexy albeit bat shit crazy captor makes you understand where she is coming from.  She pulls off this with flying colors, kind of like an American flag kite that has been set on fire and is dripping red white and blue all over a crowd of unsuspecting children at the beach, and they say these colors don't run.  Tell that to little kid trying to have a nice day out with dad and goes home looking like Seal(you know you have kiss from a rose stuck in your head now). Tangent aside What I am saying is these leads could make you beleive anything.  They must of been witnesses in the OJ case.  It's not just the leads, everyone here is so god damn good.  It has been a long time since I have seen a group of people all pull off such strong performances.  The crew were equally as competent with everything from the writing, sound, lighting and editing all being perfectly used as if it were a surgical process.  Now we come to Sean Byrne who obviously had much to do with this.  I don't usually go into the technical side of movies(I wanted to say film but knew I would get an angry comment from Cas One) but along with this being incredibly fresh(yeah I watched Juice and New Jack City), exciting and entertaining the production is just as important as I don't feel that it would of worked as well if James Nguyen had movied(see what I did there?) it.
I obviously enjoyed this and hope that I am not guilty of over hyping.  I feel confident that if you want something that will excite, confuse, anger, appall and straight up donkey punch you, you will not be let down with this.  In the day where remakes are remade and then given sequels it is refreshing to have something where the love and passion and originality  are so evident that it might as well be carved into your forehead.
4.5/5
Tromeric
Posted by Guts and Grog Reviews at 10:54 PM