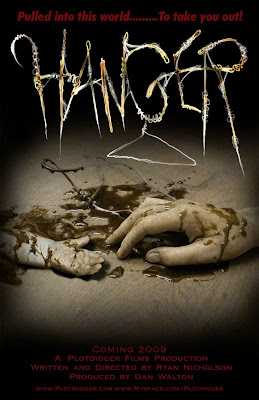 So the man that brought us Gutterballs returns with this revenge?, shock, gore fest.
Debbie Rochon got knocked up because the dude with Pinocchio's nose hates jimmy hats. Her pimp who is a little more hardcore than Butters, tells her to to take care of that shit. It's gross, no one wants to fuck a fat chick with a baby up there. What he doesn't understand is there are plenty of people that love that shit. She doesn't do it because she loves this thing she has never met.  Her pimp gives her the pimp hand for disobeying. If she would of just listened this whole thing could of been avoided. Doesn't she know we are in America?  Abortion is one of the most underused things that that Lee Greenwood dude wrote a song to protect.  Not to be insensitive but I am OK that she died.  Every time a hooker doesn't get her bastard child aborted Osama Bin Laden wins. Freedom isn't free people.  Anyways since pimp buddy is pissed he decides to take matters into his own hands. He punches that bitch and shoves  a coat hanger right up her snatchadoodle in full on close up mode in what one would call one of the highlights of the film. She is a pussy and can't handle a wee little coat hanger and dies but the baby survives and some homeless dude that was still around from the Street Trash set finds it and raises it.
We now jump ahead 18 years where we meet back up with botched abortion who meets up with his dad.  His dad gets him a job picking up trash with hybrids of the cast of What is it and Tank Girl.  The boss is a super hot fake titted secretary looking lady who likes to light candles get naked and bang herself with a Hello Kitty pen while laying on top of her desk where her transient employees can just walk up and check  out the show.  Lots of crazy shit happens.  Tampon teabag, Santa fucks an Asian sped in the ass till he shits, a pro slimes her finger and gives daddy a snatch stash and so much more.
Nicholson loves horror and it shows. He likes to shock, offend and surprise.  This movie is no exception.  It is far from perfect, for a revenge tale there is little to no revenge.  It changes nothing for the genre. The acting could be better, the story dissipates into shock and strays away from plenty of places it could of and probably should of went.  With all that said there is plenty of good here as well, just look above to find out.  Hanger is a mildly fun watch that anyone who wants to be disgusted or mildly entertained for 90 minutes should give a chance. If your looking for something to add to your best lists I would say skip this.  With all of the shocking subject matter and disgusting effects this ends up being rather forgettable and repetitive by the end.  Long story short. You will be grossed out, its fun to have a beer and show your friends, the next morning you will forget it just like that girls name who is laying next to you with a crying bloody fetus trying to run away but cant get anywhere because of the umbilical chord its attached to.

Tromeric
Posted by Guts and Grog Reviews at 2:39 PM