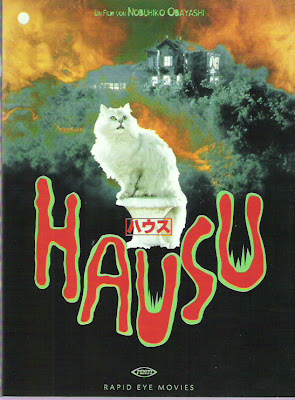 One time I beer bonged like a gallon of mushroom tea.  I saw some shit that made no sense.  It made my body and mind feel real funny like.  Don't know why but I kinda liked it.
One time I watched a movie where some girls go to one girls dead aunts house and hang out with a cat named after a golden girl and disappear one by one. They do kung fu and sing and fly and talk a bunch of shit that makes little sense. Don't know why but I kinda liked it.
These two stories are both true and made me feel the same way.  Hausu is insane, every time I watch it I say what the fuck more times than the last.  I have heard this described as an episode of Scooby Doo as directed by Mario Bava.  This is the best description of Hausu and I don't even feel like coming up with anything as this sums it up perfectly.

Gabe Nye slap your science on us.


I honestly don’t have a fucking clue what happened in this movie. Sure, I’ve had a few drinks, but I don’t think any amount of sobriety would give me insight into this one. It’s insane, and has something to do with a haunted house and some Japanese schoolgirls, but that’s about all I can tell you plot-wise. What I can tell you is that it is ridiculous, over the top, cartoonish, hilarious, and just plain fun to watch. Miike must be a huge fan of this flick, that’s practically the only way to explain Happiness of the Katakuris and Visitor Q. Criterion just put out an awesome edition of this, and it’s well worth shelling out the cash for it.
5/5
Gabe Nye the Science Guy
Posted by Guts and Grog Reviews at 12:36 AM