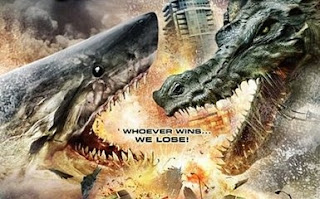 Oh my God Christ. The Asylum gives me another boner from hell(and I like hell).  Mother fucking Urkel  is a navy bad ass.  He teams up with the Dr from that shitty Star Trek(like that narrows it down). I am so stoked right now, its like the time I found out my pregnant girlfriend "accidentally fell" out of bed onto the conveniently placed replica of the sword of truth.
Urkel doesn't think that the shark is dead, some grease monkey thinks crocs are bad ass, some people die and all these people team up to take these bitches out. Like all Asylum movies you know what you are getting into, badassary. How can you not love this shit, two giant animals that keep changing sizes fuck shit up and washed up actors from previous eras make their "comebacks."I have so much to say about how awesome this is but the 12 hours of drinking is making me have the typing slurrs.  So I will leave it to you, do you see that poster. Yeah that happens. If you don't want to go out and buy this your a terrorist.  You hate our freedom. Sleep well. I will.

Tromeric
Posted by Guts and Grog Reviews at 3:52 AM No comments: 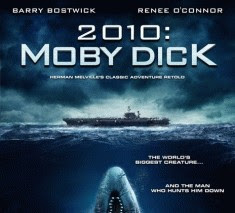 Oh the Asylum is one of the best things that has ever happened in our existence. Yeah tearing down the great wall was OK, but seriously a huge shark didn't eat the great wall.
The Asylum takes on a literary classic this time.  Moby Dick is here to fuck shit up, and this time Brad Majors is around to take this mother down.
This is a modern retelling of the classic and the Asylum pulls no punches.  Moby Dick is one scary looking mother and he is gonna get Mr. Ahab, last time he got his leg which good ol Barry reminds of about a thousand times but this time he wants the whole package.
This has it all, tons of action, amazing effects(you decide what this means), and acting and quotable script that will put Arnold to shame.  I could go on to explain what happens, but who gives  a shit. You know what you are getting here. The Asylum takes on Moby Dick, Barry Bostwick acts his ass off and bitches get attacked by a giant whale.  Do you need to know anymore? If you do, I will have Mr. Bostwick set Micheal J Fox on you with a meat cleaver, and you know he wont be able to hold that shit still.


Tromeric
Posted by Guts and Grog Reviews at 1:57 AM 1 comment:

I love Serial Killers.  I have read so many books, constantly  read serial killer calenders articles and look at all their merch with seamen leaking out of little tromeric dreaming of owning all the statues, not to mention all the movies I have spent time watching. There have been some great ones, amazing documentary's, movies like Monster and the Manson family that have blown my fucking mind, and of course all the shitty ones. I mean for Christs sake I watched a movie where fucking Kane Hodder plays Ed Gein. Really?  The thing is I still watched it and would watch it again. I guess what I am saying is I am slightly biased.  With that said, Dear Mr. Gacy is in its own fucking boat.  Its like The Asylums Titanic 2, no Leo love bullshit here just badassary.
Dear Mr. Gacy is very dialogue driven. It is based off the book The Last Victim by Jason Moss and is very different than the majority of the Serial Killer movies that have been released.  It is mostly carried by William Forsythe who plays Gacy in a chilling and remarkably realistic fashion. Jessie Moss is also unbelievable as Jason Moss.
This movie will get under your skin, the letters and conversations had between Gacy and Moss will have you clenching your asshole as if you were playing the oops poops gamble. It is very tension based and is more effective than setting a horse loose in Christopher Reeves house. From start to finish you will cringe at these convo's.  They just keep happening.  You are watching these two men get underneath each others skin but in turn your skin will rip itself off and start making itself into lampshades.  I am rambleing. Gordon and Evan are working it in my bloodstream.  If you want to see some great fucking acting that is equally interesting as it is disturbing give this shit a watch.  We all have a dark side and it is important to delve into it in healthy ways such as reading and watching and studying, otherwise you may become this sick fuck who can only feel alive if your the one that everyone is reading essays on.
Long story short.  Great acting, disturbing as fuck, interesting and important.

Tromeric
Posted by Guts and Grog Reviews at 10:00 PM No comments:

It is fine. Everything is fine!- Crispin Glover/David Brothers 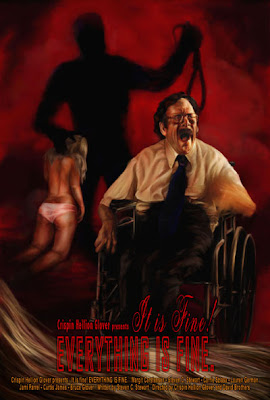 It has been a while since my jackassary caused my computer to fry like Horace Pinker.  Unfortunately my computer didn't come back to life and travel as electricity through the TV.  If it had that is a sacrifice I would of been willing to take.  Anyways,  I am gonna return with a movie that I loved but am not really sure how to review. I was lucky enough to catch a screening of it with Crispin Glover in attendance doing a sideshow and Q and A.   It was a great night all around, I was like a gitty schoolgirl about to get my first deep dicking.  I knew it may have its moments of pain but overall was gonna be unforgettable and amazing. I imagine it is like the joy of finding out you are having a baby, only I wouldn't push Crispin Glover down a flight of stairs. Well now I will attempt to explain this without ruining anything.
This is a somewhat autobiographical fantasy of its star and writer Steven C. Stewart who you may of seen as the man in the clam shell getting an H.J. from the big titted monkey in What is it?  Wright is in real life and in the film a man with severe cerebral palsy, he is in a nursing home and is pretty hard to understand, at first this is a bit off putting but as the film continues it fades away and becomes about as unimportant as a woman in china. Crispin Glover himself explained this during the Q and A that if he had put subtitles in it wouldn't be as shocking that this man could get so many ladies to fall for his charm.  The first woman he encounters is the amazing Margit Carstensen who you may recognize from many of
Rainer Werner Fassbinder's films. He then moves onto her daughter and just heads down the line, fucking and loving and killing and not always in that order.
It is fine is surreal at times, but always beautiful, shocking, and absurd. Some may find it hard to get past the language barrier of Mr Wright but anyone willing to will be rewarded with one of the most unique and exciting viewing experiences I have had the pleasure of having. If Crispin makes it to your town I suggest making a night of it, it is like nothing you will have the pleasure of experiencing.


Tromeric
Posted by Guts and Grog Reviews at 6:24 PM No comments: