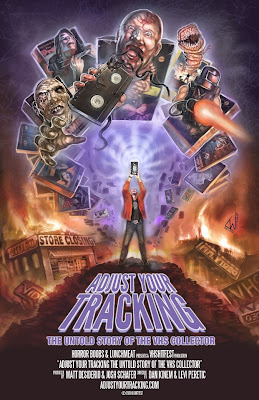 This movie has been on my radar for a while now. It is a story I definitely feel a part of, and assumed it would transfer better than the first time I recorded "A Nightmare on Elm Street" with a video camera pointed at my shitty TV when I was like eight. I was right. It looked a lot better than that.

VHS was my generations Drive In, or even Grindhouse. Sure I saw some flicks at both of those, but it was VHS that really brought me into the world of horror, and film in general. I spent  more time in video stores than Macaulay Culkin did in MJ's bedroom. That's a lot.

I stupidly sold my collection in the early 2000's when I thought I should update to DVD. A decision I have regretted since. After a stint of unemployment I was forced to sell my 2000 plus DVD collection. Something that I was not excited about, but at the same time gave me an excuse to start digging through boxes looking for all those labels I have longed for since.

As I said earlier, I have been following this film for a while. I waited anxiously for a chance to see it. That chance finally came when I found out it would be playing at Crypticon Seattle this past weekend. While I was working a booth all weekend, I hoped I would be able to find someone to watch the booth so I could finally check this. Luckily for me it all worked out.

Interviews feature everyone from heavyweights such as Tony Timpone and Lloyd Kaufman all the way to people like me who just enjoy collecting. Tons of great footage and clips from some of VHSland's most bizarre titles. Outside of great interviews and clips, we get to follow the filmmaker to a few VHS conventions that make me wish I was on the East Coast more.

This is for fans of film. Whether you once were a collector, or still are, this is highly entertaining and informative. It takes you back to simpler time that I think most horror fans miss.

-Tromeric
Posted by Guts and Grog Reviews at 6:12 PM No comments: