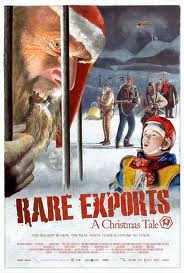 Oh Christmas.  A day that is supposedly to celebrate the birth of some crazy hippie who liked to hang out with pro's and get his feet washed buy vagrants.  It also is a day that causes mass consumerism and makes people stand in lines at the ass crack of dawn to save ten bucks on a season of The Jersey Shore.  While these aspects of Christmas aren't my thing, no I don't beleive that some dude in the sky fucked a virgin while she was asleep and then she gave birth to Charles Manson or whoever the fuck he was.  That story was told before by the original dungeon master.  Anyways all I am saying is Jesus was a douche and Jersey Shore is lame.  With that said, I love Christmas.  I love buying my friends fucked up posters of a Serbian Film, sex toys, drug paraphernalia, stuffed dead things and action figures of serial killers.  I also love drinking ski lifts while wrapping all these gifts while watching bad ass movies like the Silent Night Deadly Night series, Christmas Evil, or even Jingle all the way or Ernest Scared Stupid.  I love listening to A John Waters Christmas, the Tales from the Crypt Christmas album, or No Presents for Christmas by a God that does exist AKA King Diamond.   Well kids it looks like there is another movie to add to that list. Rare Exports is destined to sit on your shelf with Santas Slay, Gremlins and all the previous mentioned classics.
Rare Exports starts off with Oskar from Let the Right One In and Tim from Near Dark, or at least their long lost cousins spying on the evil Americans who may of just found what they were looking for.  Santa.  This Santa is pissed.  The head honcho gives a list of new safety rules that look like it was made up by Col. Phelps for Barney and Jake to follow.  We now jump ahead where all the local hunters are ready to catch them some reindeer. I assume to send to Helper Elmes so Ernest can save Christmas but we will save that for the sequel. There is a problem so they head up to the site to ask some hard questions but shockingly there is no one there so they go eat some ginger bread and wear sweet clothes.  Cousin Oskar goes out to take a piss and sees the bait is gone that dangled over dads bad ass wolf trap.  Dad goes to see whats in the whole? Whats in the whole?  It's obviously Santa Claus and like I said earlier hes pissed.  Now the movie really gets going and I dont want to ruin anything else so I will just say Cousin Oskar becomes John McClain and him and all the dads cause some havoc without naked Anne Hathaway.
Rare Exports is a hard one to explain.  It is in a world of its own, it is kind of a ridiculous subject matter to attack yet it is played as straight as David Carradines dick when he got food caught in his throat. It is nonstop fun, well acted and  like nothing you have ever seen before.  The filmmakers threw reality to the hounds and opted for a film that just makes you feel good.  Its like Hoosiers but with gutted reindeer, hundreds of naked old men flopping about and ear biting.

Tromeric
Posted by Guts and Grog Reviews at 8:19 PM 3 comments: