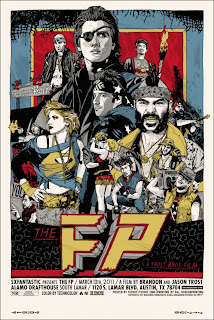 In a world where they use Dance Dance, oh shit they didn't have enough in the budget for that(not complaining) I mean Beat Beat Revelation to govern the streets you know shit is going to get real. The streets of the FP(Frazier Park) are beginning to look like Shit town. Btro one eight sevens when he is having a beat off with L Dubba E and Jtro becomes a bitch. He goes off to be Commando and cut down some trees. KcDc shows up and tells him about how shit has been in the FP. He then goes to meet BLT and sets out to clean up the FP and seek revenge.
The FP is set in almost a post apocalyptic world and filmed like the best of the eighties action/adventure films. I kept waiting for Jtro and Stacy to go ass sliding. It may not be action from start to finish as there is numerous shots of people sitting around thinking or walking the down the lonely road. That is of course made up for with montages that would make Rocky Balboa throw in his towel.  I am not trying to question the pacing. The opposite actually.  It brings you back to a better time when MTV hadn't ruined everyone's attention span with jump cuts and Snooki.
The cast all play this pitch perfect. In what could be considered a ridiculous world(if you think this you obviously have never seen my drunk ass play DDR) that is quite the feat. They balance the ridiculous with sincerity and never ham it up to much. That is why I believe it works. You get cameos from Tack and that Steve Buscemi looking cop from Idle Hands and James DeBello takes a break from shooting gay squirrels to pack around a boom box and fuck shit up.
It has been a long time since I have had as much fun in a theater as I did last night watching this. The Trost Bros created a full world of their own. All of the sets and costumes are fantastic, the music is the best since The Taint and they basically created the most comprehensive slang dialogue since A Clockwork Orange. Grab your moon boots, boombox and eye patch and get your ass to the theater to see what I can promise you will be in my top films of 2012.