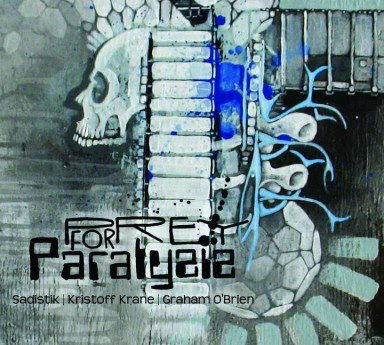 Prey for Paralysis will punch you in the stomach harder then than a guy that just found out he should of worn a condom and that his life is over. It won't just hit you and make you look like Sloth from the Goonies. It will get the job done. You will start crying but the vacuum will attach itself to your soft spot and suck the life out of you.
Sadistik and Kristoff Krane have both put out albums that I have loved and appreciated. Listening to Sadistik is a way to embrace the darkness. I don't mean in a douchy Hot Topic goth emo kid. He is like the best philosophers and he will take you to a place where you know life is shit and yet you are OK with it. It is comforting to just let go of all hope and live. Kristoff Krane is a bit more on the positive side. He knows shit gets real sometimes but he will guide you along and make sure you know it is not that bad.   The two individuals are both at the top in my opinion for different reasons and when you put them together you get something unique. Prey for Paralysis has Graham O' Brien in the producer chair and he brings something that you have never even thought of hearing. I have listened to this album many times already and still hear something new each time.  It is haunting and beautiful while still throat punching you in the soul. The album flows better than an anemic on her period. Each song precisely placed with the precision of a David Lynch film. The two instrumentals are  a welcome breath of fresh air so you can process what you have just heard and let it sink in like the passengers on the Titanic.
These three gentlemen have created something so close to perfect I don't even know completely how to put it into words. The best way I can describe it is that it is like being brutally raped by someone that try's to romanticize you at the same time. It's something you don't expect, all of your fears have surfaced and you are scared for what comes next yet still intrigued because he just keeps longing into your eyes lovingly.


Tromeric
Posted by Guts and Grog Reviews at 8:56 PM No comments: 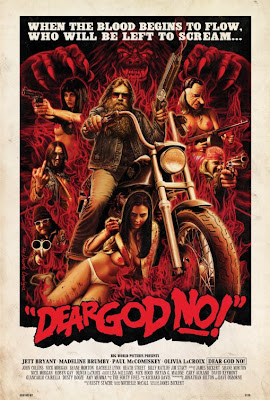 The movie starts off with our rapist of rapists waking up and cunt punting a nun. Well James Bickert definitely knows how to start a movie.  The opening credits that follow are fun and reminiscent of many of the old biker films such as Pyschomania and Werewolves on Wheels. This is just the opening people. The rest of the film if full of awesome that you just have to see with your own eyes.
Dear God No! has more blasphemy than the Satanic Bible, more PBR than Portland, more freeze frames than  The J. Geils Band, more rape than a bro down, more badassary than you can put on paper. John Waters got together with Russ Meyer and raped Michel Levesque while Herschell Gordon Lewis watched, jerked off and ordered Roger Corman off to the corner to sacrifice a virgin Doris Wishman to summon the dark lord to face fuck Jesus.
4/5
Tromeric
Posted by Guts and Grog Reviews at 9:12 PM 1 comment: 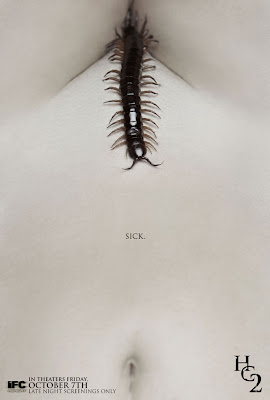 Today we have a guest review from Sadistik.  Make sure to click the link and go over and pre-order his new record Prey for Paralysis. Now onto ass to mouth.

As this is my first review at The Grog I will do my best to avoid using the pun "shit-eating grin" or anything of the sort. This is the sequel to the popular film "The Human Centipede" and it, thankfully, takes the movie in a fairly new direction. Instead of following the characters of the original, it follows an odd, mentally handicapped man who is obsessed with the original "Human Centipede." He is so engrossed in the concept that he is determined to create a 'full-sequence' and create his own string of twelve ass-to-mouth humans. In order to this, our protagonist ends up kidnapping and maiming people in order to enact his deranged fantasy.
Enough with the premise, how did it actually fare? It is very evident that Tom Six wanted to raise the bar with the shock value and he certainly achieved that. It is also evident that he was aiming for a more cult-based unsettling vibe than the original. This one is in black and white, and at times even had an "Eraserhead" tone to it (I only said tone, relax). One thing that I found redeeming about the first movie was its streak of black humor throughout and that is definitely not the case in the sequel. This movie, while self-referential at times, takes itself very seriously and is relentlessly bleak.Towards the end; however, it gets pretty ridiculous and is basically just a string of repulsive and shocking images, but that's what you signed up for when you watch this, right? All in all, I thought it did a really good job of accomplishing what it set out to do and, in my opinion, surpassed the original.


Sadistik
Posted by Guts and Grog Reviews at 3:41 PM No comments: