My Soul to Take- Wes Craven 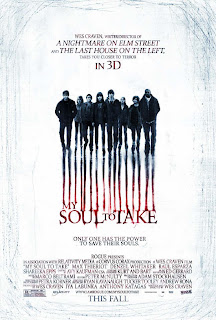 Wes Craven used to be a bad ass. He made a girl piss herself for real, he introduced us to Michael Berryman, can I just say Freddy fucking Krueger.  He sent Horrice Pinker into your electric system and fucked up a bitches head with a basketball.  There is also the other side of Craven which brought us such dogshit as a werewolf flipping the bird, passenger 58 and putting Michel Berryman in a mountain dew commercial. What I am saying is like mass genocide there have been ups and downs.The basic idea is pretty simple so Ill lay that out just like I layed out your mom last night.
So some dude is crazy and pulls a Sharron Tate on his wife and says some stupid shit.  An ambulance crashes and we jump ahead 16 years later where seven kids who were all born on the same day that crazy ass's ambulance swerved and pulled a princess Dianna are hanging out at the crash site where for whatever reason they have kept the scene alive. The crazy dude shows up and starts killing off these douche sacks. Lots of red herrings and boring deaths.
So now that you know the boring ass premise I will say this.  I don't really know what Wes was going for here. I'm convinced that he took all of his movies and made a big fuck you casserole out of them.  There are some very obvious borrowed story lines and  moments from pretty much all of his filmography, most notably A Nightmare on Elm St., Scream and Shocker but aside from Music of the Heart and Vampire in Brooklyn I think he pretty much nailed all of them.  The dialogue is fucking stupid and the kids are all around pretty unlikable. He does dabble in some pretty offensive ideas and I will admit seeing a ginger Jesus freak get  the Al Jazeera video treatment was pretty god damn entertaining.
I guess what I am saying is that this movie makes no fucking sense.  It is run of the mill and bat shit crazy all at the same time, it is predictable and confusing in the same moment and it confuses me on weather I want to hate fuck or love rape Wes Craven.


Tromeric
Posted by Guts and Grog Reviews at 10:37 PM No comments: 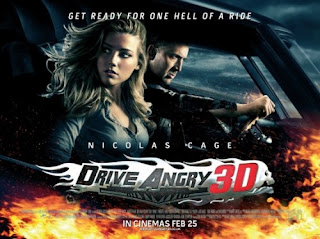 Holy shit I just blew a huge fucking load of sperm out my dick, it was flying towards the screen in slowmo when another batch of love juice shot out going faster and zoomed in and shot the first load in half that than bukaked all over the audience.
Drive Angry is one big orgasm, right from the start it penetrates every hole you have and gives no apologies.  Nicholas Cage is less crazy then usual but still fucking hilarious and bad ass.  Amber Heard is so fucking sexy that after I left I had to walk around like a greater than symbol the whole way home.  William Fichtner gives one of the best performances I have seen in a long fucking time.  He is so subtly condescending, arrogant and laugh out loud hilarious that I stopped thinking about Amber Heards ass, briefly but still that has to mean something.  Everyone in this is at the top of their game, sure I'm guessing Oscars wont be handed out but everyone is entertaining as shit.  All the supporting cast is great as well, Christa Campbell, David Morse, the dad from the rapey eyed vampire films and of course mother fucking ATKINS!!!!
The plot is simple, Nicholas Cage is pissed because his daughter eats dick hangs out with crazy Christ freaks that are actually Satan loving hippies and gets herself killed.  He comes back from "prison" to make jokes, fuck, fight, shoot in slowmo and drive like James Taylor.  Along the way he has to deal with old enemies, cops, cult members and an accountant from hell.
This movie does not need to be analyzed,  it doesn't matter. It is a road revenge supernatural action comedy full of nudity, gore, and car chases.  Its a popcorn movie, only its a popcorn movie where you pull your dick out, cum all over the popcorn, set it on fire and throw a baby on the semen covered bucket in hopes that the dark lord will take you on a joy ride.