Welcome to A Look Back on Horror with Training Wheels

I have been wanting to do a collaborative week here on the grog for a while. I have been lucky enough to have been part of quite a few great ones, and figured it was about time my drunk ass set one up. While brainstorming, and by brainstorming I mean sipping on some Bushmills and listening to horror scores, kid's horror stood out. I mean, where does horror fanaticism begin? I was thinking about this, and it obviously is different for each person.This is a fact that became even more evident as I have been reading the entries I have received.  Some people have been watching horror their whole lives. Some have had restraints. Whether it was parental guidance, religious upbringing, or just lack of material. In the next week you will find different reviews, lists, articles, and some other odds and ends. Please make sure to check all the contributors other sites, movies, bands, products, or whatever else they are a part of.

I would also like to take this time to thank all of the contributors. I know everyone involved has tons of other things they have to divide their time between, so taking the time out to write up the awesome that has been submitted has not gone unnoticed. 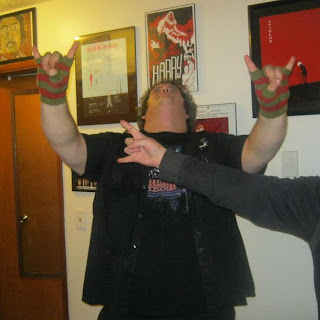 Tromeric can be found sitting in a dark room watching Homeward Bound followed by A Serbian Film.  He found a secret potion called the grog.  It is similar to The Gummi Bears Gummibear Juice but instead of making him bounce from here to everywhere it gives him the ability to endure movies such as Blood Freak and The Room on a regular basis. When he drinks the grog he also has the ability to have more references that you don't understand than Wikipedia.  In the off chance he is taking a break from the grog you can find him drinking coffee from a cup with half of the Black Dahlia pictured on it, eating Count Chocula, and making lists about whether The Taint has a better soundtrack than Voyage of the Rock Aliens. Outside of Guts and Grog, he also writes for Couch Cutter.
Posted by Guts and Grog Reviews at 9:35 PM