I will start with a quick history. 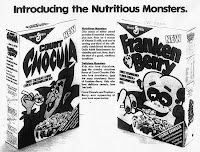 They started in 1971 with just Count Chocula and Franken Berry.

In 73 Boo Berry was introduced. What the fuck is a Boo Hooter? Actually, scratch that. I want a Boo Hooter. I don't even care what it is.

In 74 Fruit Brute was introduced. It was discontinued in 83.

In 87 Yummy Mummy took the Brute's place. It was later discontinued in 93.

I was born in 1980. I don't really remember Fruit Brute, and barely remember Yummy Mummy. I wish this was not true, but until Michael J. Fox stops being so shaky about time travel, there is nothing I can do. With that said, the other three have been a staple in my life. As a kid while watching bad ass cartoons I would see commercials for them during "Tales from the Cryptkeeper" or "Scooby Doo."

The shit was my crack. I needed it. That was a continued tradition for years. into the late nineties, I got older and it got harder to find. Lucky for me there was a store that sold items that were discontinued or didn't do well in stores. I pretty much always had good luck finding my favorite monsters there. It was awesome. I was seventeen, skipping school, and hunting for monster cereals. Eat your heart out Winger. 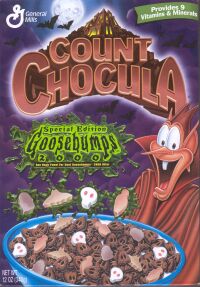 Today, Monster Cereals are just as popular if not more. The main difference is you can only find them around Halloween time. It causes nerds like me to stock up. 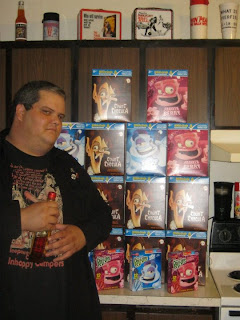 Tromeric can be found sitting in a dark room watching Homeward Bound followed by A Serbian Film.  He found a secret potion called the grog.  It is similar to The Gummi Bears Gummibear Juice but instead of making him bounce from here to everywhere it gives him the ability to endure movies such as Blood Freak and The Room on a regular basis. When he drinks the grog he also has the ability to have more references that you don't understand than Wikipedia.  In the off chance he is taking a break from the grog you can find him drinking coffee from a cup with half of the Black Dahlia pictured on it, eating Count Chocula, and making lists about whether The Taint has a better soundtrack than Voyage of the Rock Aliens. Outside of Guts and Grog he also writes for Couch Cutter.

Posted by Guts and Grog Reviews at 3:48 PM

I actually remember the debut of Yummy Mummy, was 9 at the time. I also want a gang of Boo Hooters.