Gabe Nye and I have spent more hours hunting for horror DVDs/memorabilia together than two grown ass men should admit. Many a night spent with a bottle of whiskey and a stack of movies full of puppets, bloody boobs, and knife wielding maniacs. We have suffered through some the most atrocious shit you can imagine, and discovered some of the best. His science is tight most of the time, unless he is lying to me about Bill Nye being better than Beakman. 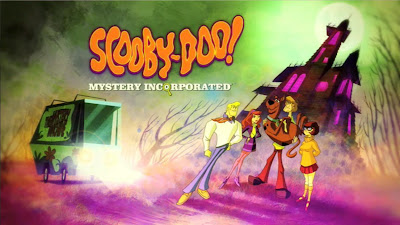 Lets be honest, most attempts to cash in on our childhood are pretty mediocre. Don't get me wrong, I like Michael Bay's Transformers movies a lot, and JJ Abrams' Star Trek is awesome, but they never really live up to the memories of my childhood. I'd wager a lot of you feel the same way. Is there anything that truly lives up to, or even surpasses what we hold in our hearts as perfect? I submit that Scooby Doo Mystery Incorporated not only matches the quality of the classic cartoon, but far surpasses it.

If you're anything like me, the classic Scooby Doo cartoons were your first introduction into the world of horror. It was a show full of ghosts and monsters and a group of innocents trying to survive the terror. Sure, it always turned out to be "old man such and such" trying to scare people away from the "abandoned whatever" and not real spooks, but it was still creepy and fun. (For the record, I'm ignoring the later cartoons where the ghosts and monsters turned out to be real. Those ruined the theme of the show and I don't acknowledge them.) My parents didn't let me watch horror movies when I was a kid, unlike some people (I'm looking at you Tromeric) so Scooby Doo was about as close as I got back then.

That said, have you gone back and watched those old Scooby Doos anytime recently? Like a lot of things we loved as kids, they aren't as great as we remember. Between that and the shitty newer Scooby Doo with real monsters I didn't have a lot of hope for Mystery Incorporated. If you weren't aware of Mystery Inc. until now, it's the latest incarnation of our favorite mystery solving teens, airing on Cartoon Network since 2010. I probably should've mentioned that at the top. Anyway, I was dubious, since (despite my love for the James Gunn penned live action movies) Scooby Doo hasn't been worth watching in a hell of a long time. 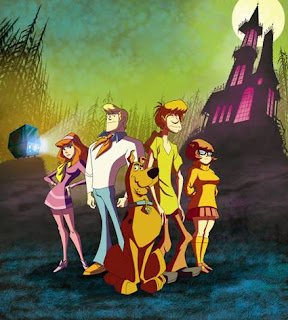 After hearing some good things from trusted Internet sources about it, I figured it was worth a look. Let me tell you, "worth a watch" doesn't even begin to do this show justice. It is phenomenal. To start out, all the comedic beats you expect from SD are there. (Can we agree that spelling out Scooby Doo every time is irritating, or at the very least that I'm lazy and don't want to do it? From now on let's agree on SD.) Shaggy and Scooby are cowards who love to eat, Velma is the smart one, Daphne is the slutty hot chick (But not as hot as Velma to me, am I right nerds?), and Freddie is the leader wearing an ascot. So, you're immediately on familiar ground, and you think you know how shit is going to go down. But then the new show gets clever. It immediately starts to build a mythology. These aren't mystery solving teens who roam the country looking for the supernatural. They're mystery solving teens who live in Crystal Cove, the "Most Hauntedest Place on Earth" as the town loves to proclaim. What does this set location mean for the show? It means that you now have a cast of recurring secondary characters to flesh out the cast. More importantly, it means that the writers can set up an overarching story to frame the episodes around. Much like your favorite live action sci-fi/horror shows like Buffy and the X-Files you get your "monster of the week", but each episode also gives you plot points and clues to a much bigger mystery. It's fucking great. 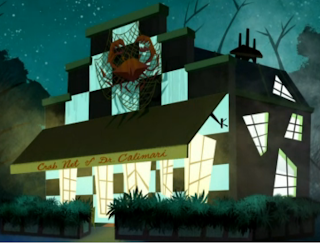 Those are the broad points of what makes SD: MI great, but there's so much more to get you hooked. The creators are obviously huge pop culture nerds, like us, and they aren't afraid to let their nerd flag fly. Episodes are chock full of awesome references, from silent movie horror (there's a restaurant called the Crab-net of Dr Calamari) to a whole episode riffing on Nightmare on Elm Street. Even better, there's an amazing Cthulhu inspired episode, with Jeffrey Combs voicing HP Hatecraft, also featuring Harlan Ellison playing himself as a rival author. If the horror references weren't enough (spoiler: they are) there are insane references to all manner of pop culture icons, from Superbad to The Warriors. They aren't afraid to bring in other Hanna-Barbera characters either. One of my absolute favorite episodes casts Blue Falcon and Dyno-Mutt as dark anti-heroes, lifting tons of dialog and style from The Dark Knight Returns. If that doesn't give you a huge nerd boner, you and I don't have a lot to talk about. 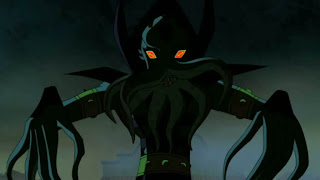 The main characters are given a lot of thought too, elevating them from the one-note stereotypes that we're used to. Velma and Shaggy develop a romantic relationship, which forms a weird, but understandable triangle with Scooby. Freddy and Daphne have a relationship too, of course, but Freddie is made more multi-dimensional by an odd family dynamic and an unhealthy obsession with trap building.

I'd be remiss if I didn't throw some love out to the cast as well. The voice talent is just awesome. Frank Welker reprises his role as Freddie (that's right, same dude that did the voice when you were a kid) and he's fantastic. Look him up on IMDB sometime, he is the voice of your childhood, and he never quit. He's Megatron, Santa's Little Helper, Nibbler, and pretty much every animal noise you've ever heard in a movie/tv show. Since Casey Kasem isn't really doing much these days, (honestly, I thought he was dead until I looked him up for this article) Matthew Lillard reprises the role of Shaggy, after playing him in the live action flicks, and is still doing a great job. The supporting cast is great too, Patrick Warburton (Puddy from Seinfeld, Joe from Family Guy, Brock Samson from Venture Bros, the live action Tick) is the sheriff, and Gary Cole (the boss from Office Space, "if you could come in on Saturday, that'd be great mmmmkay") as the mayor/Freddie's dad.

Seriously, I'm just scratching the surface here. I could write a whole series of articles about this show. If you ever loved Scooby Doo, watch this new one. Even if you hate the old Scooby, watch this new one. My brother (Jacob Von Klingele, look for his article on horror toys for kids in this series, it's awesome) hates old Scooby Doo, but I talked him into watching Mystery Incorporated and he loved it. Bottom line, it's a great cartoon for kids, and adults will find a ton of stuff to love too, maybe even more. Oh yeah, the first season is out on DVD, and season two ended not too long ago, so I'm sure it'll be out soon. 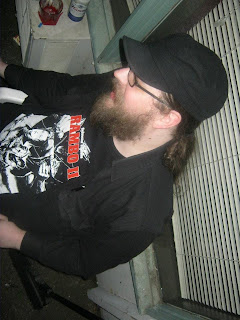 Gabe Nye is a tight scientist. He lives among thousands of action figures and plays more video games than Grandma's Boy. He could cure homelessness if he sold his DVD collection. He likes Marshmallows way too much and can watch cartoons anytime, anywhere.
Posted by Guts and Grog Reviews at 9:21 AM