Goosebumps is a Dead World


I am a new reader to Ryne's The Moon is a Dead World.   I was lucky to be involved in his recent "Halloween 15" where I took on "Cheerleader Massacre." I have quickly become a fan of his quick wit, and coverage of not just horror films but TV shows such as "Grimm."


The Search for the Bumble: Goosebumps #38, The Abominable Snowman of Pasadena 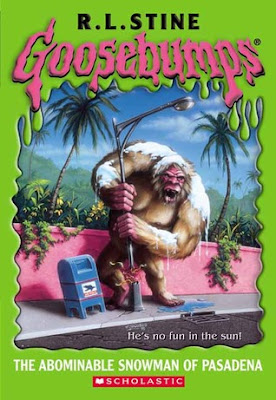 When Eric asked me to participate in his look back at childhood horror, it was October and my own site was in full swing. That means that I didn’t get to this post until way late, and it was already November. But I picked The Abominable Snowman of Pasadena as my Goosebumps book of choice because it seemed like a topical novel for the time – we’re in between Halloween and Christmas, my two favorite times of the year, and what more fitting way to meld the two together than by tackling a Goosebumps book set in the snowy climes of Alaska. But I also picked The Abominable Snowman of Pasadena because it’s a book I don’t remember too fondly from my childhood. Even though it’s #38 in the lengthy series, I remember I bought it later, and at that time my fondness for Goosebumps was starting to wear down. There were later novels that I just didn’t care to read – I had moved on to “more mature” things, and The Abominable Snowman of Pasadena is a book that slipped through the cracks.


The book focuses on Jordan and his sister Nicole, who live in Pasadena, California with their father. It’s winter, but because of the warmth of their area, the kids have never seen snow. Dad’s a photographer (although what he actually does is kind of a mystery – it’s hard to believe he gets paid well for all of his wild goose chases looking for cryptozoological creatures), and he’s just signed on to head out to Alaska for a photo shoot with the Abominable Snowman.


The kids are excited, because Dad thinks it’s a smart idea to invite them along on this dangerous expedition into the cold wastelands where a monster might lurk. They pack their things, fly out, and meet a musher named Arthur who takes them out to an old cabin in the woods tundra. He’s seen the monster, and he tells stories about a few people who have gone missing looking for it. Then he leaves with all of their stuff, leaving everyone stranded with a monstrous ape-thing looking to eat all their trail mix.


Dad wins the award for “worst parent ever” in this novel; I’d like to think that R.L. Stine is a better father than the one he writes about, because not only does Dad bring the kids out to a frozen tundra, he also insists – against their wishes – that they all go into the cave where the abominable snowman is and then bring it back to Pasadena. Has he never seen King Kong (the one with Jack Black, I mean)? It never goes well to take a monster out of its habitat.


For most of the book, Stine doesn’t deviate from genre clichés like this; however, once they get the snowman back to Pasadena, things get creative. A snowball taken from the monster’s lair turns Nicole into an ice block; more snowballs change Pasadena into a winter wonderland. The only way things can go back to normal is for the monster to unfreeze himself and monkey-hump all over the frozen objects, effectively warming them with his 3000 degree body heat until they melt.


What I’ve noticed most about going back through Goosebumps book as an adult (well – sort of an adult) is that the childhood angst present in all of them is a little more than I can take at this stage in my life. There’s a lot of narrator complaints, a lot of problems with sisters and bullies; there’s a reason why kids tend to outgrow these books but still remember them nostalgically. At a certain point, the storylines begin to lose relevance, and the plots begin to feel like weakened takes on more mature horror stories.


That doesn’t mean that it wasn’t worth it to relive The Abominable Snowman of Pasadena. I read it in a couple of hours (at work, mind you – got paid to read a Goosebumps book), and the readability is actually kind of nice as a distraction or a pulp read. Plus, there’s also those memories that rereading the books bring to life; I was taken back to a time when things were much simpler, and sometimes I long for the days when I would read Goosebumps under my blanket, a flashlight shaking in my hand. 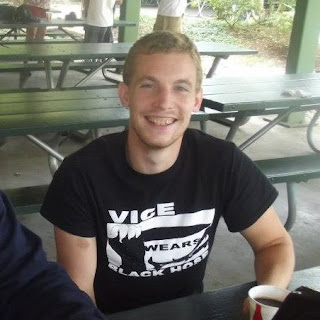 Ryne Barber writes and runs his own horror blog, TheMoonisaDeadWorld.net. He also writes for HorrorNews.net. He fits in pretty well at Guts & Grog, because when he's not writing or watching horror, he's drinking all types of brews.
Posted by Guts and Grog Reviews at 1:50 AM