I met Dee through Bad Netflix along with the other black geeks. Some of my favorite riffs during these have come from him. 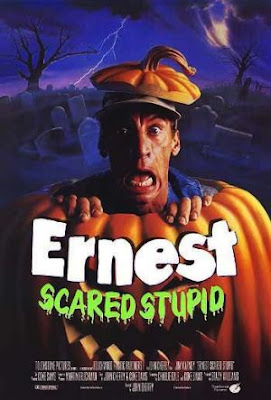 Time to switch speeds. With all of this horror bullshit I need to rest my sweet virgin eyes. Ha! Virgin. I watch porn, love Bible Black and I seen nearly every Madea movie. Lost that nickname sometime ago. But as a favor to a friend I will review a movie a lot of class and deserving of the name classic. "Ernest Scared Stupid". Okay...I laughed as I typed that last part. It's a kids movie for fuck sake. I love Ernest P. Worrell. He's that nice excited good wholesome idiot Christian Republican everyone has in their neighborhood. Yeah we have those people in the hood, yet they still vote for Obama. I've been an Ernest fan since Ernest Goes to Camp, Jail, him saving Christmas, him having an exhibition against the Charlotte Hornets and that odd one with him in the Army. Oh yeah, that basketball movie really fucking happened! Magic Shoes, that's all you need to know. 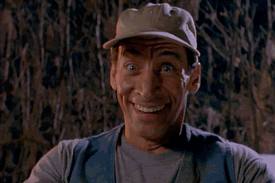 The movie begins with Jim Varney having reaction shots to old horror movies. Either that or Ernest is getting the best blowjob ever. The movie gets going with the troll in "Evil Dead" mode trying to attack little girl. A girl who is smiling! John R. Cherry is a cruddy director. Anyway the troll named Trantor has been kidnapping children and turning them into wooden dolls. They trap Trantor with a net! A fucking net stops him! Phineas Worrell or Jim Varney in makeup, binds the troll under the roots of a great oak tree. But before they can complete the ritual, Trantor casts a curse on the townsfolk that he will return and once he has captured five children, his children will be born from that very tree and overrun humanity. Yeah, yeah, yeah fatty, no one cares.


Jump ahead to 1993 a hundred years later. Ernest and his dog Rimshot works as Trash man. Ernest falls in the back of the dumpster is crash to dead. No he's conveniently made into a block of trash. Lucky for Ernest he has kid sidekicks helping him out. Elizabeth, Joey and Kenny. Ernest is later ordered to clear the yard of Old Lady Hackmore played by Eartha Kitt. She looks fucking insane, or Black Lady Doc Brown. She tells Ernest to leave and never come back. And should be charged with attempted murder because she uses her blow torch to scare off Ernest. The kids are making a haunted house and the Mayor's sons tear it down. A strong wind could have done the same thing but moving on. Kenny asks Ernest for help and we get Ernest doing his various impressions. I heard other critics hate this, but fuck that. I love this shit. Yeah, I know it makes no flipping sense but it's hilarious to me. Maybe because this movie was made for kids! After that business, Ernest promises to find them a better place to build a haunted house, he goes to the giant tree that Trantor is buried under. The kids make it into the world's greatest treehouse. Seeing this as a kid made me so jealous. Even when my family left the hood my friends didn't have one. Hell my cousins in the middle of the Carolina countryside didn't have one. Lucky white kids. Well Hackmore says what everyone was thinking. A whole world of trees, he picked the one with a troll buried underneath! The bullies comeback and the kids with their treehouse defensive's, throw pizzas at them. The 90's were so care free. Well after talking with Hackmore, Ernest talks to the kids. For some dumb reason she told Ernest how to release the troll! Why! So Ernest not believing it decides to say it. Waking the great troll. Super Ernest, you doomed us all. Thanks Catwoman. 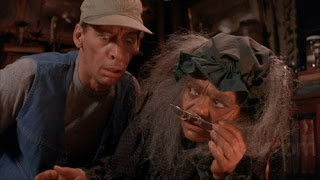 Now Trantor is actually pretty scary looking. Compare to what we seen lately in horror, it's pretty well done. Ernest soon sees Trantor and runs for help. Unable to get help from Sheriff Binder, Ernest goes to Old Lady Hackmore for help. Trantor first turns Simon of Alvin and the Chipm...I mean Joey in a wooden doll. Somehow Trantor gets energy or the tree does...I dunno. He gets this wooden kiddie dolls and they make his children grow. The next day, Joey's disappearance concerns Kenny and Elizabeth. Ernest tells Tom and Bobby Tulip about and of course they believe him. Just putting it out there the fat brother is different in this movie. I would have a story but IMDb has failed me. So the brothers take advantage of Ernest by selling him fake troll-trapping devices. I...I didn"t laugh at that. Well Ernest and the kids set up a trap in a dumpster. Trantor however is on a fucking roll. He gets a skateboarder, and later that night Elizabeth. And that scene as a kid was fucking scary. Yeah, I was pussy. But as predictable as the scene is it's great for kids. While trick or treating, Kenny is lured away from a friend by hearing Elizabeth's voice. But it was Trantor with a kid he made into wood. Kenny out runs him and Ernest gets him a troll in his trap. When unveiling it to the Mayor and Sheriff, it turns out to be the Mayor's sons. Ha! Ernest is soooooooo fired for this. 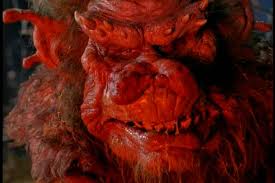 As Trantor is adding to his collection of dead kids he decides to stop the only one who can stop him. And thats Ernest. So they have a fight scene on a truck. Where the dog is driving the truck, sorry thats funny to me. It does bring up one big question. A net stopped Trantor but a 82 Chevy going 30 doesn't. Also Trantor's breath breaks the windshield on the truck. The fuck! Then Trantor goes ECW on Ernest by throwing him into a oil drum and kicking it off the truck. By my account Ernest should be dead. Anywho, after that Ernest and Hackmore try to out mug one another. But they find out through a book that two things can destroy Trantor; "The heart of a child." and "A mother's care." Ernest reads the inscription of MI_K. Ernest and Hackmore are so fucking stupid. Ernest even more because he thinks is "Miak". Goddamn it. Google what is Miak? A rare, slightly antiquated beverage, generally produced in Bulgaria, which may or may not be fictional. Miak's first mainstream appearance was in the film Ernest Scared Stupid. Why is the Urban Dictionary the only one with any type of definition? I hate the internet. Even worse for Hackmore who figures out that that "A mother's care" is unconditional love. How? By seeing a mom and son fight for a few seconds and then the kids saying I love you. How did you figure that one out by those 30 seconds of Full House? So Ernest and Trantor have a showdown in the schools Halloween party. And we find out that the Miak works! He kills him. End of movie. BULLSHIT! Of course it doesn't work! After Trantor is scared off by ice cream because you know, milk! It's all good anyway, he made the Mayor's son into wood and he's ready to unleash his plan! But we see that poor ol' Rimshot was made into wood. Kenny realizes Trantor's weakness, and gathers the mayor's other son and a group of the neighborhood kids to fight Trantor with milk. Also the townspeople go to the tree too. Ernest runs out there to face off with Trantor but is too late. Trantor's pods from hitting the ground and giving birth to his children who attack the townsfolk. And it looks like the mutant version of the Garbage Pail Kids were going ape shit. Finally Kenny and the others launch a defensive and manage to destroy all of the trolls except for Trantor who becomes too powerful to be affected by milk. What to do! He turns Kenny into a wooden doll and faces Ernest. Now I let a lot of bullshit slide in this movie but this is silly. Ernest with the power of heart dances with Trantor. Hugs him and kisses him on the nose. Either Trantor said fuck it to this movie or just overload on affection. Because his head exploded. Evil has been broken! Yeah! Trantor's spell is broken on the children he had taken, the five from that night as well as four children from the 19th century including Hackmore's sister. Hey wait a second! How old is Hackmore! That would mean she would be a slave girl. Slavery in the south wasn't truly over until...you know what fuck it. But what about Rimshot! He's alive too! Rimshot runs to Ernest and they makeout. White people. Look at Eartha Kitt's face as that happened she said the same in her head. The End. 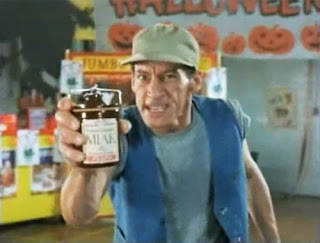 This movie was...a good kids movie. I think those who hate this movie hate it for the wrong reasons. Its made for kids and Ernest no matter how corny is funny to kids. I love the guy, and shame on anyone who doesn't. But to grade it. Meh...it ain't Ernest Saves Christmas. 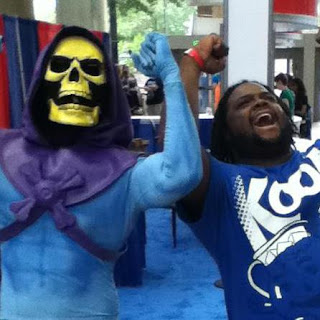 Dee, 1/3 of the podcast team of 3BlackGeeks. He is a lover of 80's/90's action movies, Anime, Black movies, wrestling and video games are in there somewhere. Not pretentious until you show him "Ghost In The Shell" or "Above the Rim". He often wishes Lou Gossett Jr and Sidney Poitier would beat the living crap out of shitty black actors.Make sure to check the blog and podcast.
Posted by Guts and Grog Reviews at 10:13 AM