Garbage Pail Kids brought Mr. Gable and I together. We have since went on to start the Bad Netflix crew along with some others. The only man I know that enjoys every movie about a killer animal more than me. 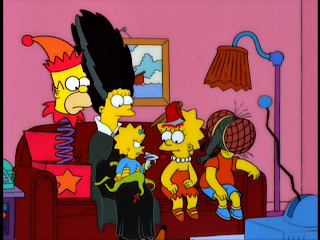 Ahhh...what would happen if all the billboards came to life? A better question is what would happen if a Kent Brockman billboard came to life and killed Kent Brockman? HISTORY. That's what happens. Homer likes donuts, so he goes for broke and steals the greatest of all donuts and somehow manages to smuggle it into his house unbeknownst to his family. A crazy electrical storm comes through and  brings the doughnut man to life who goes around zapping everything else alive and then they all terrorize the town. I like this segment because I've always been a sucker for giant monster destruction movies like Godzilla or Gamera and this just taps into that in a way I never thought possible.

TO THIS DAY I want a Monkey's Paw. How awesome would it be to have 4-5 wishes (depending on what universe you live in)? The Simpsons are at a black market and purchase a Monkey's Paw from a crazy old guy. They immediately start making wishes which turn around on them like the Wishmaster and everything goes to crap. The funniest part of this segment is when Ned takes the Paw and suddenly everything is OK if not better again. 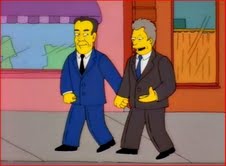 As a child I didn't follow politics. I barely follow it now. But it was because of this segment that I actually knew who was running for president. And they were totally gay for each other. Kang and Kodos, the yearly alien visitors, inhabit the bodies of Bill Clinton and Bob Dole until the election after which they will enslave humanity and rule the world. The best part is when the election is about to go down and Homer crashes the UFO into congress....but no one listens to him anyway.

Where else can you summon zombies wearing a Michael Jackson album? WHERE!? Some of the greatest moments happen in this segment. Homer exclaiming (with a shotgun), "TO THE BOOK DEPOSITORY!", Homer shooting Zombie Ned not realizing he was a zombie, and Homer gunning down Shakespeare and Washington.

6. The Devil and Homer Simpson 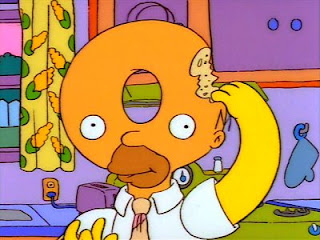 I've already said that Homer loves donuts right? This episode exploits that to a level never before seen. Homer sells his soul for a doughnut. When the Devil comes to collect they call in lawyers to fight for his right to keep his soul. Between trials Homer is summoned to Hell....where he consumes all of the donuts ever to exist....and he wants more. The torturer is dumbfounded.  This segment also features one of the greatest quotes of all Simpsondome: "Mmmmm....forbidden doughnut."  I say it every time I eat donuts.

I love Sci-Fi (and SyFy). I always thought the idea of mold turning into a civilization was awesome. This segment has its hits or misses but what makes the episode great it when Bart continually destroys the society in the petri dish, the society finally evolves far enough that they have space ships, which they send out to battle Bart. I laugh every time.

Playing on Chucky and other killer doll movies a Krusty doll comes to life and tries to kill Homer. That part isn't really what makes this episode great. The best part is when Homer goes to purchase the doll, he goes to an occult store and his conversation with the store owner is priceless.

And the fact that they call service and the technician comes out to discover that the doll has been "set to evil." HAHAHAHAHA

I love time travel. In this segment Homer breaks a toaster (in the funniest way possible) so he fixes it, inadvertently building a time machine. He goes back to the days of dinosaurs and every time he touches anything or ruins something it changes the future in drastic ways. At first he's really cautious and the littlest things turn into nightmares: Ned rules the world, Donuts don't exist (but they rain), and then finally he has enough and goes on a murderous rampage. He never does get the world put back exactly as it was but he's content with it.

Arguably the greatest segment in Treehouse of Horror history and easily the most quotable. No beer and no TV make Homer Something Something. Urge to Kill RISING. And the fact that this starts of a chain reaction of Willy getting an Axe to the back in every segment just cements this episode as one of the greats.  This segment spoofs The Shining, even though they try to tiptoe around it because of lawsuit issues by calling it the SHINNING. Every moment of this segment from them driving out to the old hotel and continuously forgetting things at home to them freezing to death watching bad TV, this episode is just unending win from beginning to end.

I remember this episode fondly. Actually I remember seeing the previews and having my mind blown by Homer IN THE THIRD DIMENSION! This segment features Homer going into an alternate reality where he is all CGI and awesome. I actually missed this entire episode when it first aired. I remember seeing the previews and getting overly excited every time and then I just missed it. I sulked and was depressed for an entire YEAR until I caught it on TV again. It was worth the wait. It is something that really never happened again and it was just so cool to see, especially in a Halloween episode. And to this day this segment is my favorite, for all the wrong reasons. 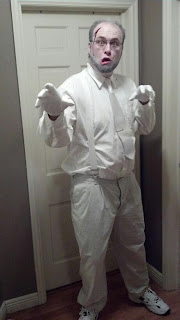 Mr. Gable resides mostly in Mr. Gable's Reality. That reality is much more fun than the one you live in. There, ANYTHING is possible! Ridiculous fights, out of place robots, unnecessary sequels, annoying characters, Troll 2, and anything Charles Band has ever touched! Mr. Gable's Reality is your independent resource for everything BAD. Bad Movie News, Reviews, Opinions, and so much more!

Posted by Guts and Grog Reviews at 1:49 AM