Peter Poison and I met in a Sushi restaurant through Seth the Zombie. He had taken over my room when I moved to an apartment. We started talking film and I lent him "Combat Shock" and " I Stand Alone." Sushi and film talk became a tradition and through a series of events we now are roommates.

Let me start by saying that I did not grow up being a horror fan. I never really watched slasher movies, or thought of Halloween as my favorite holiday, and avoided haunted houses like the plague. However, I will say that what little horror I was exposed to has influenced my life since and especially my art. I do still avoid haunted houses, but the visualizations in the children's horror I did grow up with have left a deep impression on me. If it were not for these illustrators and story tellers my art would not depict what it does nor follow the style it has. Most of the horror exposure I remember came in elementary school. I remember distinctly, being in school and having this reoccurring Scholastic Book Fair. I'm not sure why we couldn't just go to a bookstore to find all the books they were selling, and maybe it ended up benefiting the school somehow, I don't really care, but what I do remember is my mother really not being keen on some of the books I wanted to get. She really pushed for the historical biographies and the Magic School Bus series, but all I really wanted was Goosebumps. During this time I definitely judged a book by its cover, and Goosebumps had the most bad ass covers. Tim Jacobus drew the covers with just enough to make you want to read the story, and plenty to make you stare at the cover for hours. R.L Stine's stories did end up being a pretty good scare, but what really captured me was the cover illustration.

I remember the cover for #2 Stay Out of The Basement was of this slimy and hairy monster hand protruding from a door that was ajar. It was a simple illustration, with enough detail to give you a sense of texture, and with no indication as to what the hand was attached to, it left the reader wondering and worrying about what this slimy green beast would turn out to be. The #4 Say Cheese and Die! cover of a family portrait of skeletons with the tag line "a picture worth a thousand screams" drew me right in. It was a family BBQ caught on a Polaroid, but all the family members were skeletons. The subtlety of it made it even scarier, the skeletons all seemed to be enjoying themselves and no in-your-face menace, just enough to make it creepy. Finally the #18 Monster Blood 2 cover really got to me, probably because we had a class pet, some sort of rodent, at the time. The cover featured a giant hamster with huge sharpened beaver-like teeth, busting out of his cage. The addition of a green goo dripping down the desk made the whole situation that much more sinister. The covers were all pretty simple but bold; a little cheesy but still scary and disturbing. They were a pretty perfect children's horror series, but the books which truly scared me were the Scary Stories series.

As most everyone reading this has probably lived and breathed horror their whole lives I'm sure you have all seen and read at least one. The illustrations for these stories, which were culled from all sorts of myths, legends, and folklore, were and still are some of the most haunting ink drawings I've ever seen. All were in black and white, with the colors bleeding together almost like accidental ink blots that then morphed into surreal beasts. The appendages were spindly, long, and draw out, and the faces were contorted with hollow eyes and wide-open screaming mouths. The muted lines gave an almost airy aura to the whole illustration. I don't even remember the stories, but the illustrations will remain imprinted in my mind. Although horror was few and far between in my upbringing, I count these illustrations as a major influence on both my interest in certain artists and upon my own visual expression. 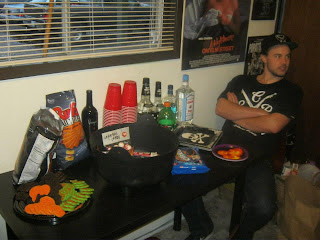 Peter lives at the house of grog along with Tromeric. While he does not partake of the grog itself, he is heavily involved in the marathons and party's that revolve around it. Originally from New England, he found his way to Portland three years ago. He spends much of his time hiking and fishing in the Washington and Oregon outdoors. He is an artist who has had shows including one at the Lovecraft. He loves Honey Buns, M & Ms, Fritos, Southern Rap, and Doom Metal.
Posted by Guts and Grog Reviews at 5:54 AM